China Vies for Primacy Over the World's Buddhists

Bodhgaya, India -- The Buddhist holy sites of Bodh Gaya in India and Lumbini in Nepal - two of the religion’s most sacred pilgrimage locales, are becoming the dual epicenters of a Great Game between India and China. 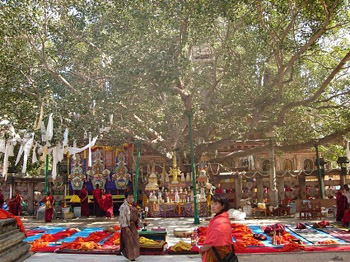 Bodh Gaya is considered the undisputed heartland of the Buddhist world. However, Bodh Gaya’s eminence is being challenged by the Hong Kong-based Asia Pacific Exchange and Co-operation Foundation, which is backing Lumbini as Prince Siddhartha Gautama's birthplace. The foundation’s executive vice chairman, the Beijing-born Xiao Wunan, has described developing Lumbini into a Mecca as part of scheduled Chinese US$3 billion investment in Nepal.

For hundreds of years the faithful have flocked to Bodh Gaya, a small town some 100 kilometers south of Patna, the capital of the Northeastern Indian state of Bihar, bordering the Himalayas. Known in the Buddha’s time as Uruvela, it is the place where all Buddhas have become enlightened.

It is here where Prince Gautama Siddhartha was said to have sat down under a pipal tree and entered into deep meditation after six years of wandering, becoming The Buddha. The pipal tree, a species of fig, became known as the Bodhi or Bo – enlightenment -- tree. The tree now at the site is said to have been descended from the original Bodhi tree. For Buddhists, a red sandstone slab marking the spot of the Buddha’s first meditation is said to be the center of the universe.

Growing Chinese influence is something that New Delhi and Moscow both admire and fear. Chinese displeasure was enough to force the cancellation of Indian Prime Minister Manmohan Singh’s planned speech at the Global Buddhist Congregation conference in Delhi in November 2011 conference (along with all major Indian MPs), although Delhi drew the line at cancelling the event altogether, which was what Beijing really wanted.

Lumbini, 171 km. southeast of Kathmandu, is a key component in the Chinese objective to dislodge Nepal from India’s orbit as a satellite state. The Chinese investment is designed to transform the currently sleepy town into a first-class tourist destination including a new airport and highway, hotels, a convention center, a Buddhist university and place of pilgrimage for Buddhists from around the world.

According to the Xinhua News Agency, in July, the United Nations Industrial Development Organization and the Asia Pacific Exchange and Cooperation Foundation signed a memorandum of understanding in Beijing in Beijing to begin the development of Lumbini.

The Nepalese government was irritated over not being consulted, eventually prompting Beijing to deny reports in the Nepali media of a secret pact with elements of the country’s Maoists and instead saying they had signed the MOU with Tourism Minister Khagda Bahadur, also a Maoist leader. Pushpa Kamal, who goes by the nom de guerre Prachanda, the head of the Maoist party, is a co-chairman of the APEC Foundation along with Steven Clark Rockefeller Jr, a fifth-generation member of the Rockefeller family; Jack Rosen, chairman of the American Jewish Congress, and Leon Charney, a real estate tycoon and former US presidential adviser

Apparently, however, according to media reports, the one Buddhist that Beijing intends to have nothing to do with the Lumbini project may well be the most influential one in the world today – the exiled Tibetan leader the Dalai Lama, who heads the Gelug, or Yellow Hat branch of Buddhism. It seems thaty no one connected with the Lumbini project has contacted the Buddhist leader’s Dharmasala, India office to invite him to participate. China regards him as an outlaw and a renegade out to foment rebellion in Tibet.

After decades of professing atheism as the state’s official policy by the Communist Party, whose official stance is that religion is the opiate of the masses, President Hu Jintao declared a “harmonious society” policy in 2006. Since that time, Chinese influence in religion has been growing, with the proviso that Beijing effectively gets to pick the leaders, as it does with the Catholic Church branch in China. Thus Beijing’s influence in Buddhist affairs in particular has been growing. The party selected its own Panchen Lama, the religion’s second highest official, after spiriting away the Tibetan religion’s own reincarnated child, and vainly attempting to educate the Karmapa Lama in socialist doctrine until he made his dramatic escape from China and joined the Dalai Lama in India.

This is post-Cultural Revolution, face-saving code for “ally yourself to Beijing, and you will enjoy freedom and benefits.” It has paid off for most Buddhist institutions in China. The bid to co-opt the Buddhist faith is considered a part of dominating the Himalayan region, which Beijing considers essential if China is to continue reaping the benefits of its influence over the Shanghai Cooperation Organization, a mutual security organization founded in 2001 by China, Kazakhstan, Kyrgyzstan, Russia, Tajikistan and Uzbekistan. Although Russia is nominally an equal member, Moscow worries that it is losing out to its onetime protégé’s economic allure and soft power.

This is especially so with the establishment of Confucius Institutes in many Central Asian nations save Tajikistan, and training its young, bright and promising youth in Mandarin. In a throwback to the Han and Tang dominance of the Silk Road and the imperialist Qing, China’s hydroelectric and manufacturing clout in post-Soviet breakup countries are prompting Russia to reengage with the Central Asian and Eastern European power blocs.

China also enjoys with the Central Asian countries the benefit of buffering the impoverished zone of Xinjiang, which is likely to be politically volatile in future due to the Tibetan Buddhist and Uighur Muslim mix (China’s elite counterinsurgency forces, the Snow Leopards, are currently deployed in the region).

Buddhism also forms a second front of religious diplomacy between China and a different power bloc, and that is the Pacific-Atlantic superpower of the United States. Since the Chinese occupation of Tibet, the Dalai Lama has been a promoter of “universal” values - a word that translates in Beijingese as “Western” or “American.”

This has resulted in a worst-case scenario for Chinese Buddhists as well as Chinese people who practice Tibetan Buddhism: having to choose between condemning a perfectly legitimate Tibetan religious leader or falling into the media trap of Tibet as an enlightened Shangri-la with bouncing bodhisattva bunnies before the PLA occupation.

This choice grows more agonizing with each Tibetan that sets herself or himself alight. After appointing its own Panchen Lama, all reincarnations of Tibetan Buddhist leaders are now to be approved by the state, raising concerns that this means the future Dalai Lama must be chosen by Beijing. The story on the Tibetan side, of course, is much more complex and private, and the Dalai Lama is far more long-term thinking than Beijing wants him to be.

Seen in this light, China’s paranoia about Tibet is no ill-thought out choice but a reluctant one, made by the party despite knowing it makes them look immature and out of touch. It fits quite well into the bigger picture that we shall see this century.

This curious chess game has led to am ironic observation on my part at the Global Buddhist Congregation conference in Delhi that the Chinese sought to stop, there were plenty of Taiwanese Buddhists there as well as Malaysian, Singaporean, ones, etc., almost all of whom are Chinese Buddhists, but almost not a single Buddhist from the mainland. I was one of the few Buddhists from Hong Kong.

The institution of the temple and monastery - the sangha - is above the ever-fluctuating fortunes of secular politics. 2600 years of watching over sentient beings is what it will forever do. In the meantime, however, innocents are dying as sacrifices in the Great Games of superpowers. Buddhists struggle as much as anyone else to find solutions, having been swept up as diplomatic pawns that could checkmate the king, or at least trap the queen.