ABA, China -- Armed police in full riot gear stand guard along the main street in Aba, a small Chinese town where a young monk burned himself to death last March, setting off a series of self-immolations. 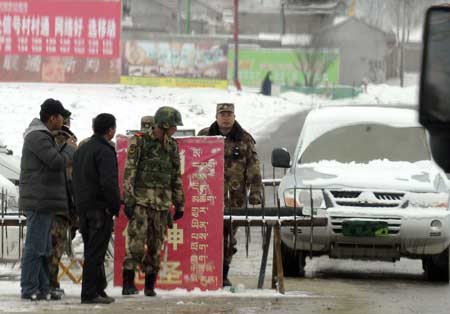 << China's Tibetan areas experience fresh turmoil
This photo taken on Sunday, March 11 shows a police roadblock into Aba county town in Sichuan province. Armed police in full riot gear are standing guard along the main street in Aba, a small Chinese town where a young monk burned himself to death last March, setting off a series of self-immolations. (AFP)

Four years after deadly unrest shook China's Tibetan areas in March 2008, beginning in the Tibetan capital Lhasa before spreading to other areas, the region is once again in turmoil.

In the last 12 months, at least 26 Tibetans, many of them young Buddhist monks and nuns, have set themselves on fire to protest against Beijing's rule and call for the return of their spiritual leader the Dalai Lama.

Many of the gruesome protests have happened in Aba in the southwestern province of Sichuan, home to the sprawling Kirti monastery, one of the most revered institutions in Tibetan Buddhism.

AFP reporters who briefly gained access to the town before being expelled on Sunday saw hundreds of police in full riot gear lining the streets, some armed with guns, metal bars and fire extinguishers.

A day earlier, rights groups say, an 18-year-old Kirti monk self-immolated in Aba to mark the anniversary of a 1959 uprising in Tibet that led to the Dalai Lama's flight into exile.

But the grim form of protest has become almost commonplace. By Sunday, shops were open and people walked freely around, although the main street was blocked to vehicles and two armored personnel carriers sat outside a small theatre.

“You are not allowed to be here, and must return to Chengdu as soon as you can,” he said referring to the provincial capital.

Rights groups say the situation is at its worst since the March 2008 unrest, in which Tibet's government-in-exile said more than 200 people died. China denies that account, saying there were 21 deaths and that “rioters” were responsible.

Many of China's ethnic Tibetans accuse the authorities of religious repression, and say their culture is being eroded by an influx of Han Chinese, the country's main ethnic group.

Beijing insists that Tibetans enjoy freedom of religious belief and says their lives have been made better by huge ongoing investment into Tibetan-inhabited areas.

China's reaction to the immolations has been to crack down even further, deploying huge numbers of military police and stationing government officials in religious institutions to organize “political reeducation.”

Interviewing anyone in Aba is now virtually impossible, but monks at the Kumbum monastery — known in Chinese as Taersi — in the neighboring province of Qinghai said they were being forced by authorities to undergo “patriotic education.”

“Basically, we must vow to love the Communist Party,” one shaven-headed monk who declined to give his name told AFP at the monastery, which is set against the backdrop of the snow-capped Himalayas.

“This is absurd. We are monks, our love is devoted to Buddha and our spiritual leader the Dalai Lama,” he said, refusing to be identified out of obvious fears of reprisals.

Up to 1,000 of the 3,000 monks in Kumbum have been placed under differing sorts of restrictions due to their failure to meet political requirements, a local Tibetan resident with close links to the monastery told AFP.

Such restrictions range from curbing privileges such as travel to further enforced indoctrination sessions, he said, adding that “there are a lot of officials in the monastery.”