Buddhist Master Passes Away in Shenzhen

Shenzhen, China -- The 105-year-old master Ben Huan passed away on April 2, 2012 in the Hongfa Temple in Shenzhen of south China's Guangdong Province, according to an announcement of the temple posted on its official website. 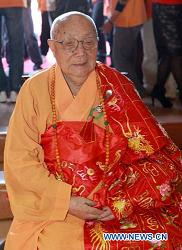 Ben Huan was born in 1907 and became the first abbot of Hongfa Temple in 1992. He was elected honorary president of the Buddhist Association of China in 2010.