HONG KONG, China -- A skull bone believed to be from the original remains of Buddha arrived in Hong Kong on Wednesday to much fanfare. 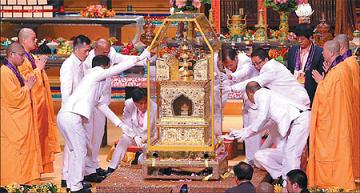 << A skull bone believed to be from the original remains of Buddha.

It is the first time the sacred Buddhist relic has been taken outside mainland China.

The relic is believed to be the world's only remaining parietal bone of Buddha.

It was flown in by chartered plane and was greeted at the Hong Kong International Airport by government officials and monks.

The relic was reportedly buried for thousands of years and first unveiled in Nanjing two years ago.

According to Buddhist belief, Buddha's skull bone grew naturally upward, resembling a hair bun at the top of his head.

The relic is said to be yellowish-white in colour, around 10 centimetres in diameter, and curved at the top.

Some 300,000 devotees are expected to flock to see the relic over the next six days.

The Hong Kong leg of the relic's journey coincides with "The Third World Buddhist Forum" and the Birthday of Buddha on Saturday.

The relic will head to Macau next.