Lhasa, Tibet (China) -- The best place to enjoy Samye Monastery's ingenious layout, a mini version of the Buddhist concept of the universe, is on the top floor of its grandiose and central Wuzi Hall. 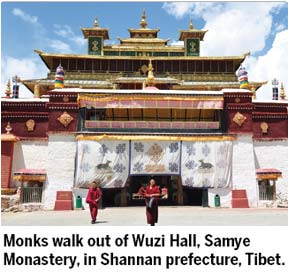 It is also a good spot to watch as the 1,200-year-old building is rejuvenated with a facelift.

Situated by the Yarlung Zangbo River, in Shannan prefecture, Samye Monastery is highly respected by Tibetans, most of whom are devoutly Buddhist.

It is also known for its rich collection of Buddha statues, sutras, murals, stone inscriptions, and religious buildings that combine Tibetan, Chinese and Indian styles.

Every year some 200,000 pilgrims and tourists descend on Samye Monastery to see them.

In 2011, renovations to the building - its drainage, electrics, fire safety and the frescoes - were begun, says Phuntsogwangdus, head of the monastery's management committee.

Funded predominantly by a 70 million yuan ($11 million) central government grant, about 15 million yuan was spent in 2011, and the rest is scheduled to be paid out in the next two years.

The 42-year-old Tsering, who has been a monk at the monastery since 1988, says: "We didn't even have a presentable toilet before."

In the past, the monks' livelihoods and the operation of the monastery depended mainly on alms and a monastery-run passenger transport company, of which Tsering is the manager.

"The monastery had no extra money for major renovation projects," he says.

Before 2011, the only significant building work was a central government financed facelift of the "golden roof" and the third floor of Wuzi Hall, in 1989.

Now Samye's 13 Buddha halls, a tower displaying a Buddha, and other major buildings are being renovated. Among them, the Hall of Safeguarding Buddha will cost about 50 million yuan.

The monks have also helped with the renovations.

"We'll be the most direct beneficiaries when our monastery gets fixed and its environment improved," says Phuntsogdorje, one of those who is overseeing the project.

Previously, the 99 monks of Samye Monastery lived in cramped conditions. Phuntsogdorje, for instance, shared a 16-square-meter room separated down the middle from another room by a board.

"We cooked, slept, studied and worshipped Buddha in the same room. Of course, that would disgrace Buddha," he says. "Now the conditions are much better and we can focus more on our Buddhist studies."

Samye Monastery is home primarily to monks of the Ningma Sect. But all the monks are included in the social welfare system, Phuntsogwangdus says.

Monks in Tibet often suffer health problems like hypertension and renal diseases, so the management committee has called on doctors to provide medical consultations and keep health records.

Meanwhile, the local government has gifted body-building equipment to the monastery.

And it is not just the buildings that are being improved. Since the area surrounding the monastery is affected by desertification, since 2011 there have been efforts to make it greener.

The prefecture government also plans to invest about 60 million yuan to make Samye Monastery into a comprehensive tourist destination, by improving its landscaping.

Phuntsogdorje is confident the changes will make the monastery more pleasant and attract more visitors, thereby bringing in more income.