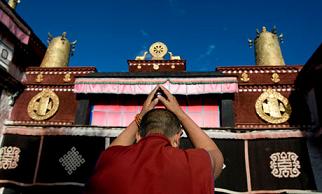 Authorities see developing tourism as crucial to the economic future of Tibet and have set a goal of attracting 15 million tourists a year by 2015, generating up to 18bn yuan (£1.8bn), in a region with a population of just 3 million.

But Tibetan groups have expressed concern that the surge in tourism has also eroded traditional culture and that the income has economically benefited Han Chinese more than Tibetans.

Ma Xinming, deputy mayor of the city, told journalists that the park would cover 800 hectares (1980 acres) on a site just over a mile from the centre. He said it would improve the Tibetan capital's attractiveness to tourists and be a landmark for its cultural industry, state news agency Xinhua reported.

The mayor said it would include attractions themed around Princess Wencheng – the seventh-century niece of a Tang-dynasty emperor who married a king from Tibet's Yarlung dynasty – whose tale has been embraced by Chinese authorities as a parable of ethnic harmony.

The park will include outdoor shows about the princess, along with other educational and entertainment facilities. Business and residential districts would also be included.

Ma said the park would also reduce tourist pressure on the Jokhang Temple and the Barkhor in the heart of old Lhasa, helping to protect the city's heritage.

According to state media, the number of visitors to the region rose by 25.7% year-on-year in the first five months of 2012. The tourism bureau has said Tibet expects 10 million tourists this year – up one million from last year – with tourism revenues growing to 12bn yuan. But foreigners were last month indefinitely banned from visiting, amid growing tension.

The announcement came after two Tibetan men set fire to themselves in Lhasa. Tibetan areas across western China have seen a spate of self-immolations, with those involved protesting against Chinese policies.

Officials in China often see theme parks as a way to develop tourism, though many have failed to attract the investment and visitors they anticipated. Whether the Lhasa government ends up building the project on the massive scale envisaged remains to be seen.

Professor Robert Barnett, an expert on Tibetan culture at Columbia University, said that while some officials had talked about environmentally and culturally appropriate tourism in Tibet, "this represents a nail in the coffin – symbolically and perhaps practically – of attempts by Tibetans and Chinese to promote that."

He added: "To recoup that cost, you have to have tourism on an unimaginable scale."

Barnett said Tibetans might well go to the theme park themselves, but would also be likely to question whether it was good for their culture and worth the huge investment.

"They are very acutely aware of these issues ... but I am not sure they have any form to ask them publicly," he said.

In addition to creating an international "Swiss-style" tourism town, the schemes will involve building 22 "model villages", where tourists will be able to enjoy homestays. Critics have warned the plan could damage the fragile environment.