HANGZHOU, China -- International coffee company and coffeehouse Starbucks has again brewed debate over business versus historical interests in China after its opening of an outlet near a famed Buddhist temple in east China. 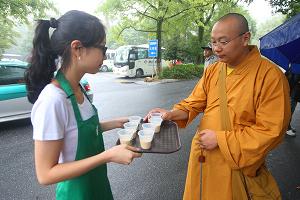 << A Starbucks waitress serves a monk coffee on Saturday. The US coffee giant Starbucks has opened a cafe shop close to the Lingyin Temple, a Buddhist temple in Hangzhou, capital of Zhejiang province, giving rise to controversy. Some say Starbucks is bringing the "stench of money" to the temple. Others say it is only bringing Western culture into proximity with Chinese culture. [Photo/CFP]

The controversial Starbucks outlet opened on Saturday in the scenic zone of the quiet, secluded Lingyin Temple, or the Temple of Soul's Retreat, which is located in a wooded area on the bank of the West Lake in Hangzhou city, Zhejiang Province.

This is not the first time for Starbucks to light a fire under the kettle in China. In 2007, similar disputes over commercialism in points of historical interest eventually forced the closure of an outlet of the company it had operated for seven years in Beijing's Forbidden city, also known as the Imperial Palace.

Some people have expressed concerns about the American coffee chain's presence near the peaceful temple.

"The smell of the combination of coffee beans and burning incense must be the fragrant smell of money," Sina Weibo user "Liulianxiaobawang" wrote.

"Starbucks turned to the Buddha after it had 'entered' the Imperial Palace," wrote "Tangboxiaohu."

"Actually, the coffeehouse is a long distance from the temple. It is located in the tourist service area on Lingyin Road outside of the temple, as part of the supporting facilities," said Wang Shan, deputy director of the Lingyin Administration of the West Lake Administration in Hangzhou, provincial capital of Zhejiang.

The temple's administration has urged the cafe to change its name from "Lingyin Temple Starbucks" to "Lingyin Starbucks" to make it clear that it is not located inside the temple.

"Starbucks chose a relatively remote place in the scenic zone that is not along the tourist paths. It takes 20 minutes to walk from the temple gate to the coffeehouse," said a Starbucks staff member who declined to be named.

The cafe released a statement on its official Weibo account on Monday afternoon, explaining the cafe's location and professing its respect for Chinese history and traditional culture.

Meanwhile, a KFC outlet opened about 50 meters away from the controversial Starbucks months ago, joining other supermarkets and restaurants in the area. The Starbucks outlet was the administration's final plan for the service area.

Wang Shan said the administration has strictly controlled the commercial business environment surrounding the temple. "Many shops have been removed from the scenic area and new businesses can only open after a series of examinations, in order to protect the environment and culture of the Lingyin Temple."