Xiahe, China -- The Labrang Thangka Festival is an important festival at the old Labrang Monastery that was one of the six leading monasteries of the Geluk tradition of Tibet. 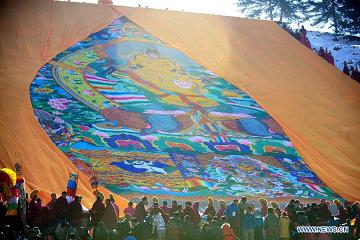 Every year, warmly dressed people ascend to the high-elevation monastery to pray and get blessed. When the monks carry out the thangka, thousands of people assemble in front of the slope big and the vividly woven thangka is displayed. It is a major highlight of many a Tibetan Buddhists’ year.

Tibetan monks, pilgrims and nomads converge on the monastery to participate in the annual "Sunning of the Buddha" ritual, in which the world's largest Thangka of Buddha (90ft in length, 40ft in width) is unveiled at first light on the side of a mountain. The Monlam festival, or Great Prayer Festival, is the grandest religious festival in Tibet.

The Buddha tangka display or "the basking of Buddha" is a Tibetan tradition praying for a good year. As one of the six leading monasteries of Tibetan Buddhism, Labrang Monastery built in 1709 is home to more than 1,000 lamas and is another center of the Gelug Sect, also known as the Yellow Sect, of Tibetan Buddhism outside the Tibet Autonomous Region.

The monastery is about four hours south of Lanzhou. It is located in a high mountain valley at an elevation of about 3,000 meters or 10,000 feet.