Buddhist nun dies after setting herself ablaze in eastern Tibet 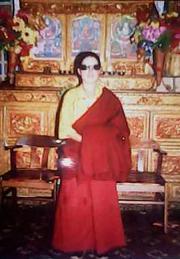 Latest sources coming out Tibet on June 15 stated that the Tibetan nun has been identified as Wangchen Dolma and a 31-year old.

The authorities have surreptitiously cremated her body at the hospital and kept the family members of the deceased under house arrest.

The details of the nun were not known as the authorities have immediately imposed a heavy restriction shortly after the incident.

Dolma who set himself on fire to protest the Chinese repressive policies in Tibet, has succumbed to her burn injuries, while undergoing treatment at a hospital in Dartsedho county on 14 June.

"Immediately after her self-immolation protest, she was taken to a hospital in Dhartsedho county, eastern Tibet, but it is not mentioned whether she was taken by Chinese police or local authorities," Yama Tsering, a monk from Gaden Monastery in Soutt India told The Tibet Post International (TPI), citing sources in the region.

"She set herself on fire near Nyatso Monastery, Kham region of eastern Tibet, where over 3000 thousands of Buddhist monks from over 50 monasteries in Kham region are currently holding a 10-day annual Buddhist debate meet, started on June 10," Tsering added.

"The Buddhist debate meet is still going ahead this evening, not been affected so far by the incident," he said.

Since 2009, at least 119 Tibetans have self-immolated reportedly to protest Chinese hardline and repressive rule in Tibet and of them 102 were reportedly passed-away due to their severe injuries.

Most of them have called for the return of the spiritual leader of Tibet, His Holiness the Dalai Lama to his homeland and freedom for Tibetans.