Shortcut to becoming a Buddhist monk or nun 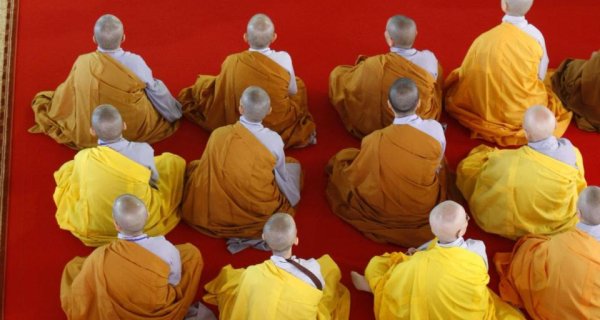 Such vows probably take a bit too long for many in today’s bustling China. Now Ci’en temple in Zhejiang province is promoting a free programme offering part-time ordinations allowing people to live as a monastic for three months, six months, one year or two years.

In less than a week, the demand for the three-month course has been so heavy the monastery’s website keeps crashing, and 200 people have signed up for the programme, which includes morning and evening special exercises, and tasks such as carrying water. They sign up using the “QQ” mobile social network.

“People in today’s secular society always feel so much pressure. There are not too many opportunities to stay in a temple, enjoying the calm and following the teachings of the Buddha to purify the spirit,” said Zhidu, abbot of the temple.

In the Tibetan Buddhist tradition, monastic vows are for life, but in recent years monasteries in Thailand and Burma have offered part-time vows.

Abbot Zhidu said that since 2006 the temple had received short-term student monks and nuns every so often, and he thought the Ci’en temple should do the same thing.

The requirements are that monks must be older than seven and younger than 60, while nuns must be 18-60, and they don’t need to shave their heads. Candidates must respect Buddhism, be of good physical health, have no contagious diseases and no bad habits.
The temple also has wireless internet, and people can bring their laptops, which can be used at specified times, something some web commentators find odd, but others like.

“Sounds good to me. You can experience a peaceful life and get away from the busy world. And computers are allowed. Why not?”