Wuhan, China -- Guiyuan Buddhist Temple is located at Hanyang District, which lies in Wuhan, the largest city in mid-west China. It was built in 1658 during the Qing Dynasty, and was included into "the Four Buddhist Monasteries of Wuhan" together with the Baotong Buddhist Temple, the Gude Temple and the Zhengjue Temple. 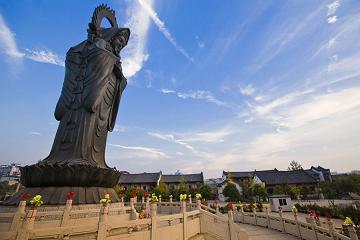 << The huge two-sided Guanyin Avalokitesvara saves you from torment. (CRIENGLISH.com)

Guiyuan Temple covers an area of 4.67 hectares, with more than 200 halls, rooms and temple buildings. It is famous for its splendid architecture, unique sculptures and rich Buddhist collections.

The temple has three distinct courtyards. The central yard possesses a free-life pond with a bell tower and drum tower on both sides. The Weituo Hall is located in the center with the Great Buddha's Hall several steps ahead.

The wing-rooms of the hall function as living rooms and the abstinence dining hall, while the meditation room sits at the back. In the south yard, 500 lifelike Arhat sculptures are enshrined in the Hall of Arhats. The superb manufacturing technique and distinctive styles of the sculptures make them extremely precious.

You can find the Depository of Buddhist Texts in the north yard. The first floor serves as a display room, exhibiting the stone sculptures found in the Northern Wei Dynasty, the Guanyin Avalokitesvara in the Tang Dynasty and the Buddhist statues from other periods. Some treasured instruments and paintings are also displayed here.

The second floor of the depository stores more than 7,000 volumes of Buddhist sutras, including some texts and pal-leaf manuscripts from India, Burma, Thailand and Sri Lanka. There are two especially valuable treasures: a Chinese character of "Buddha" and a volume of the Flower Adornment Sutra and the Lotus Sutra.

The former is written on a piece of paper no larger than 60 square inches. Yet it consists of 5,424 small Chinese characters, showing the texts of the Diamond Sutra and the Heart Sutra. The latter treasure is written in a special ink made by blood and gold dust.

There are a number of monks in Guiyuan Temple at present, and the current abbot of the temple is the respectable Master Long Yin. Walking into the temple, you'll be welcomed by small and winding paths that will lead you to clear ponds and solemn halls surrounded by big ancient trees. It's a perfect place to regain your inner peace.