BEIJING, China  -- President Xi Jinping believes China is losing its moral compass and he wants the ruling Communist Party to be more tolerant of traditional faiths in the hope these will help fill a vacuum created by the country's breakneck growth and rush to get rich, sources said. 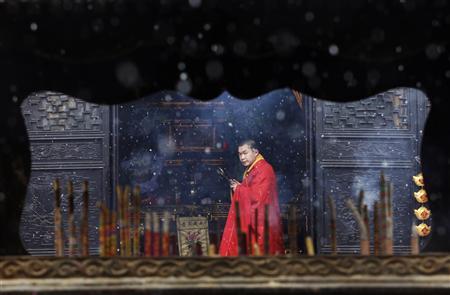 << A monk is seen through an incense burner inside a temple as snow falls in Jiaxing, Zhejiang province, in this February 19, 2013 file photo. REUTERS-William Hong-Files (CHINA)

Xi, who grew up in Mao's puritan China, is troubled by what he sees as the country's moral decline and obsession with money, said three independent sources with ties to the leadership.

He hopes China's "traditional cultures" or faiths - Confucianism, Buddhism and Taoism - will help fill a void that has allowed corruption to flourish, the sources said.

Skeptics see it as a cynical move to try to curb rising social unrest and perpetuate one-party rule.

During the early years under Communism, China's crime rate was low and corruption rare. By contrast, between 2008 and 2012 about 143,000 government officials - or an average of 78 a day - were convicted of graft or dereliction of duty, according to a Supreme Court report to parliament in March.

Xi intensified an anti-corruption campaign when he became party and military chief in November, but experts say only deep and difficult political reforms will make a difference.

Meanwhile, barely a day goes by without soul-searching on the Internet over what some see as a moral numbness in China - whether it's over graft, the rampant sale of adulterated food or incidents such as when a woman gouged out the eyes of her six-year-old nephew this month for unknown reasons.

"Xi understands that the anti-corruption (drive) can only cure symptoms and that reform of the political system and faiths are needed to cure the disease of corruption," one of the sources told Reuters, requesting anonymity to avoid repercussions for discussing elite politics.

Government agencies would moderate policies towards Confucianism, Buddhism and Taoism in the hope these faiths would also help placate the disaffected who cannot afford homes, education and medical treatment, the sources said.

"The influence of religions will expand, albeit subtly," a second source said, also speaking on condition of anonymity.

"Traditional cultures will not be comprehensively popularized, but attacks on them will be avoided."

Skeptics described such tactics as a ploy to divert blame away from the party for the many problems that anger ordinary Chinese, from corruption to land grabs.

"Buddhists accept their destiny and blame their predicament on the bad deeds they did in their previous lives," said Hu Jia, an AIDS activist and Buddhist who has been intermittently under house arrest since his release in 2011 after serving 42 months in prison for subversion.

Religious freedom is enshrined in the constitution but the officially atheist Communist Party has no qualms about crushing those who challenge its rule. The party is paranoid and would remain vigilant against cults and feudal superstition, the sources added.

China banned Falun Gong as a cult and has jailed hundreds, if not thousands, of adherents since 1999. Former president Jiang Zemin also defrocked and put under house arrest a six-year-old boy anointed by the Dalai Lama as the second holiest figure in Tibetan Buddhism in 1995.

In its 2012 report on international religious freedom, the U.S. State Department said Chinese officials and security organs scrutinized and restricted the activities of registered and unregistered religious and spiritual groups.

The government harassed, detained, arrested or sentenced to prison a number of adherents for activities reportedly related to their religious beliefs and practice, it said.

Indeed, conservatives in the party still frown on what they see as "religious infiltration". Zhu Weiqun, a vice chairman of the top advisory body to parliament, warned in an interview with China Newsweek magazine in June that party members should not even practice any religion.

Others think change is in the air.

"This is for real," Lin Chong-Pin, a Taipei-based veteran China watcher and former government policymaker, said by telephone. "To save the party and the state from the current crises, Xi must fill the spiritual void."

In a sign of the changes Xi wants, Zhang Lebin, deputy director of the Bureau of Religious Affairs, wrote a commentary in July in the party's mouthpiece, the People's Daily, that said "treating religions well should become a common consensus ... and the right to practice religions should be protected".

The following month, Xi called for building both a "material and spiritual civilization" - Communist jargon for growth and morality.

Back in February, Xi met Taiwan's top Buddhist monk, Hsing Yun, in Beijing along with a delegation of dignitaries from the self-ruled island which Beijing claims as its own.

Meetings between top Chinese and religious leaders are rare.

Hsing Yun was banned from China in the early 1990s for giving sanctuary to a senior Chinese official at his temple in the United States after the 1989 Tiananmen crackdown. He is now a bestselling author in China.

In yet another sign, Yu Zhengsheng, ranked fourth in the Communist hierarchy, visited five temples in Tibetan areas in July and August and a mosque in western Xinjiang province in May - unprecedented for such a senior leader in terms of frequency.

Independent experts put the number of practitioners of Buddhism, Taoism and folk religions at between 100-300 million.

Chinese emperors embraced Confucianism for centuries, encouraging the philosopher's teachings of filial piety and respect for teachers and authority. Mao then posthumously purged Confucius in the early 1970s.

Confucianism has since made a comeback, although not a smooth one.

A 9.5-metre (30-foot), 17-tonne statue of Confucius was erected in 2011 outside a Beijing museum adjacent to Tiananmen Square, not far from a portrait of Mao which overlooks the area. It vanished weeks later with no official reason given. Conservatives celebrated its removal, which came on the heels of an online uproar about the statue's location.

Buddhism was virtually wiped out during the 1966-76 Cultural Revolution when temples were shut and Buddhist statues smashed.

It has crept back although China maintains tight control in Tibet where monks and nuns have been jailed for their loyalty to the Dalai Lama, who fled into exile in India in 1959 after an abortive uprising against Communist rule.

About 120 Tibetans have set themselves alight in protest against Chinese rule since 2009. Most have died.

Taoism, or Daoism, a philosophy-turned-religion preaches living in harmony with nature and simplicity.

Nevertheless, despite the emphasis on fostering more openness for traditional faiths, one thing in the world's second biggest economy will remain the same.