Dharamshala, Tibet (CHina) -- A young Tibetan monk of the Kirti Monastery in Ngaba County in Amdho region of north-eastern Tibet staged a peaceful protest against China's rule on April 26, raising slogans calling for freedom and return of His Holiness the Dalai Lama to Tibet. 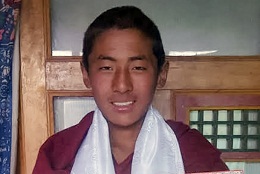 "Lobsang Tenpa, a 19-year-old monk of Kirti monastery in Ngaba county, protested at around 2.30 p.m. local time on Heroes Street in Ngaba county ," Ven Lobsang Yeshe and Kanyak Tsering, media coordinators of the Kirti Monastery based in India told The Tibet Post.

"Chinese security personnel arrived at the site of the protest and quickly started beating him brutally," they said, adding "Tenpa protested Tenpa protested against China's hardline and repressive policies on Tibet."

The teenaged Tibetan monk head wrapped with a self-drawn Tibetan national flag, he shouted slogans calling for "freedom for Tibet" and "the return of His Holiness the Dalai Lama to Tibet," the source said citing contacts in Tibet.

Images received from the region, Tibet also show the young Tibetan monk staging a lone protest by shouting slogans against Chinese rule and carrying a portrait of His Holiness the Dalai Lama in the restive Tibetan county.

Tenpa, a native of Meruma town in Ngaba county joined Kirti Monastery at a very young age, they added.

According to sourse, 'there is a very heavy security presence, with large numbers of armed military in trucks at road junctions, plain clothes police mingling amongst people, and government officials in parked cars every steps throughout the town.'

The armed military strictly controlling the movement of the monks. Hundreds of monks from the monastery have been disappeared, while many have been sentenced to lengthy jail terms on charges of "subversion".

A verified total of 130 Tibetans have self-immolated in protests against Beijing's rule since 2009, calling for freedom and return of His Holiness the Dalai Lama to Tibet.