Dazu County, China -- Using 3D printing technology, a replica has been created of an 800-year-old Buddhist statue to help restore the historical monument. 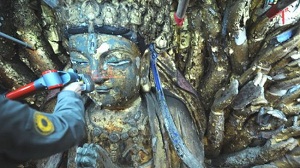 << A worker scans a statue of Qianshou Guanyin in Dazu County, Chongqing on April 18, 2011.

The 3D-printed Qianshou Guanyin or Thousand Hands Goddess was made in 1:3 proportion to the original, which was carved out during the Southern Song Dynasty on Mount Baoding in Dazu County.

"Now this white Buddha image you see is a 3D model we made by means of modern 3D technology, or three-dimensional laser scanning. The model will provide us with a scientific reference for restoring the main statue," said Chen Huili, deputy director of Dazu Cultural Relics Protection Project.

The restoration project, dubbed "China's No.1 rock heritage preservation project," kicked off in April 2011 and is expected to complete next year.

Ten 3D-printed buildings have also been put on display in Shanghai, built by using a mixture of sand, concrete, and glass fiber as ink.

At a cost of 20,000 to 30,000 yuan each and intended as offices, the structures have been erected in suburban Qingpu District without using any brick, tile, or sheet metal.

The structures can either be printed on site or assembled from pre-printed walls, with the material being produced in a fully-digital way through a central computer system. The walls are hollow inside, and can be filled with anything the owner wants.