Hubei, China -- Expensive properties and material items are supposedly being made holy in exchange for money but monks insist they are doing nothing wrong. 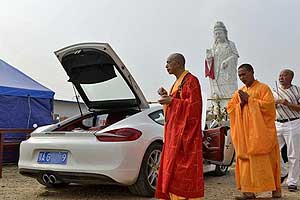 << Fast service: A new Porsche was blessed in a temple in Hubei

Buddhist monks are under fire for apparently accepting cash to bless a businessman's PORSCHE.

It's part of a upcoming trend in China where expensive properties and material items are being made holy by the religious group in exchange for money.

The move has caused widespread anger across the country with the most recent example being when IT boss Tao Hung asked Buddhists to bless his luxury sports car.

He asked monks to bless the car and to pray that he would drive safely in the vehicle and be lucky in always reaching his destinations on time without incident.

But critics branded the blessing pointless and saying that if the man wanted to avoid accidents, he should drive slowly and take care not to count on God to do the job for him.

One commentator writing online said: "He may have money but one wonders how he came to make it, given the fact that he shows an eminent lack of intelligence."

The businessman himself declined to comment and the monks said that blessing means of transportation has always been part of their Buddhist tradition.

They added there was nothing wrong with agreeing to pray that the man's Porsche delivered him safely after each journey.