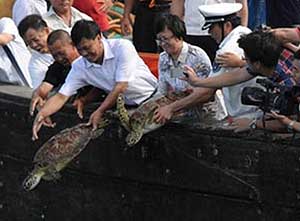 "Fangsheng", or "release life", is a spiritual act wherein believers take captive animals and release them back into nature. Turtles are released into rivers or lakes for longevity, and fish for enlightenment.

Like all things good and wholesome, the ceremonial act has become the center of a crooked business-venture for opportunists trying to squeeze a little renminbi out of believers' pockets.

According to Want China Times:

In the coastal resort of Sanya, CNR reported the existence of a life release operation in the Buddhist-themed Nanshan Cultural Tourism Zone. Various species of fish and turtles are available for people to set free into the sea, with prices ranging from 39-1,999 yuan (US$6.35-$325). The most expensive are sea turtles, which can cost up to 50,000 yuan (US$8,150).

Workers there told CNR that the turtles are purchased from licensed farms and that they are not recaptured after being released.

However, a report by Shanghai-based online news agency the Paper said local fishermen had admitted to capturing the released sea turtles and selling them back for a profit.

Last year, concern over Shanghai's water supply arose when a slew of dead fish were found floating along the man-made Sijing pond in Songjiang district. It was later revealed to be the result of Buddhist faithful "releasing lives to freedom". Some spent up to 10,000 on the fish, officials said.

The religious act went horribly astray last December in Jinan when a group of people released over 800 captive carp in a river only for the fish to be immediately swooped up in nets 100 yards down stream.