China lays claims to Leadership of the Buddhist World

Baoji, China -- With an impressive display of Chinese Buddhist culture and hospitality, China laid claims to giving leadership to the Buddhist world, by hosting over 600 international delegates for the 27th General Conference of the World Fellowship of Buddhists (WFB) at this historic city in north western China from 16th-18th October. 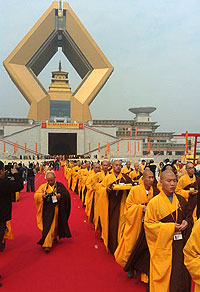 << The Famen temple where the official opening took place

The conference theme of Buddhism and Public-Benefit Charity” laid the path of Buddhist collaboration, especially in mobilizing financial and spiritual resources to advance the development of Buddhist communities across the world in a compassionate and socially harmonious manner.

The opening of the conference was preceded by a colourful cultural performance where the Chinese Buddhist history and culture was introduced to the international audience with song and dance that reflected the rich artistic traditions of China, but presented in a modern style. It was a classic example of how to modernize traditional Buddhist artistic expressions without loosing its Asian flavour.

Though not officially acknowledged, China is today home to between 200-300 million Buddhists thus making it the country with the world’s largest Buddhist population. The restored grand Buddhist temples in Baoji and in close by Xian, and the impressive Buddhist cultural display at the opening ceremony of the WFB meeting is anything to go by, it indicates that Chinese Buddhism has undergone a remarkable revival, after Buddhist temples were destroyed and Buddhist practices disrupted during the Cultural Revolution of the late 1960s.

Mr. Lou Qinjian, Governor of Shaanxi Provice (where Baoji and Xian are located) in a speech opening the conference told delegates from over 40 countries that Buddhism has become an important part of Chinese civilization for over 1800 years and his province has been the gateway for the flow of Buddhism from India to China. He added that over this period Buddhism has spread the ideas of equality, benevolence and harmony that have become important parts of Chinese civilization.

Mr. Qinjian pointed out that the Chinese government has been renovating many historic Buddhist monuments in recent years and has also been encouraging the development of Buddhist cultural practices.

He noted that the Buddhist community in the province has been practicing Buddhist charity and carried out many charitable activities outside China. Thus, he hopes, with the new project of the Chinese government to revitalize the Silk Route that originates from here, this conference will help to carry forward the virtues of Buddhism to contribute to social harmony and peace (in Asia)”.

The WFB was founded by the renowned Sri Lankan Buddhist scholar Dr. Gunapala Malalesekare in 1950 and its original headquarters was in Colombo. But, today, its secretariat is in Bangkok and its Secretary General Phallop Thaiarry comes from Thailand. The organization brings together Buddhists of all denominations such as Theravada, Mahayana and Vajrayana (Tibetan) and it has regional centres” (meaning member organistaions) in 39 countries.

It is fitting that 64 years after it was founded, WFB General Conference came to the very place where Buddhism started its eastwards journey. It was a Shaanxi native, the great Buddhist monk Xuanzang, who took the Silk Route to India around 605 AD spent some 12 years at Nalanda University and brought back the Tripitaka and other Buddhist scriptures to China. Over 20 years he translated these into Chinese and other languages, which helped to spread Buddhism to other parts of China, Korea, Japan and Vietnam. The Chinese organisers took the international delegates on a special tour to the newly renovated temple in Xian, about 150 km from Baoji, where he lived and did his translations.

In a message to the conference magazine, WFB President Phan Wannamethee said that the arrival of Buddhism to China has brought significant changes to the country’s arts and culture. Book printing was originated in China in the 9th century when Buddhist propagators had to make a block for printing Buddhist sutras. Hand copying of the text was unable to meet the rising demand (and) as a result, a printing block was created and that was the origin of book printing (in the world)”, he noted.

Another important monument to Chinese Buddhism is the magnificent new Famen Monastery, where the opening ceremony of the WFB conference took place. It has been built next to the ancient seven-story pagoda under which the finger bone of Sakyamuni Buddha was discovered in 1987, after lying buried in a tunnel underneath for over 1,100 years. Today, in addition to the new monastery, they also have a modern Buddhist museum and Buddhist Academy to train monks and nuns.

According to the Buddhist Association of China (BAC) – the local host – there are over 240,000 Buddhist monks and nuns in China, more than 28,000 monasteries – with over 3,000 of these in Tibet – and 38 Buddhist Academies. Its president venerable Chuanyin told delegates that the conference in China is a milestone for Chinese Buddhism. It will allow China to play a greater role in the Buddhist world and the Chinese Buddhist community is always committed to public charity endeavours to help society,” he declared.

We hope to work with Dhamma brothers (and sisters) in other countries” venerable Chuanyin added, this conference would open a new chapter with Chinese characteristics in the future of WFB”.

There were still Tibetan Buddhist representatives from overseas and the keynote speech at the opening ceremony was given by a youthful and confident looking Panchen Lama Baingen Erdini Qoigyijabu, who was recognized in 1995 by the Chinese government as the reincarnation of the 10th Panchen Lama.

We can see that as China’s economy grows there is growing religious freedom here,” noted Venerable Medagama Dhammananda, a Vice-President of WFB. He is delighted with China’s hosting of the WFB conference and pointed out that after fleeing Tibet, the Dalai Lama has unfortunately joined forces with the West to create a bad image of China to the world.

We think the lead China has taken to develop cultural links with the world is a good step,” said Ven. Dhammananda in an interview. We are very happy about China giving leadership to the Buddhist world”.

The leadership China would give could steer the WFB and the international Buddhist community towards a path where Buddhist charity will be practiced in a more organized fashion applying Buddhist compassion towards eradicating suffering. Many rich Buddhist monasteries in China and Taiwan have been doing this for years, with Taiwan’s Tzu Chi Foundation leading the way.

Delegates from Sri Lanka, Bangladesh and Myanmar made impassionate pleas during a plenary session for WFB conference to mobilise international Buddhist support to address socio-economic problems in grassroots Buddhist communities in their countries. They argued that lack of financial resources have made their communities vulnerable to proselyting activities by Christian and Islamic groups leading to sometimes violent conflicts. They complained that there was no global voice for Buddhists and thus the international media paints them as troublemakers.

A resolution pushed by Sri Lanka to amend the WFB constitution to make it possible for WFB to give a Buddhist voice to the international media was adopted unanimously. It was argued that when WFB was first set up the mission was to unite the different sects of Buddhism by bringing them under one platform. The conference in China has stunningly shown that this unity has been achieved. The next step would be to develop a global voice for Buddhists, like what the Organisation of Islamic Countries (OIC) does for Muslims.

We face great hardships in protecting our Buddhist monuments and heritage, especially from Muslim incursions into our communities” explained Ven. Dhammananda. There is a feeling that (WFB) need to be pro-active in empowering Buddhist communities and protecting them from unethical conversions (in Asia)”.

Dr Bikiran Prasad Barua from Bangladesh, the chairperson of the Publications, Education and Culture Standing Committee of WFB agrees that Buddhist communities in South Asia in particular, is in dire need of international support.

Bangladesh has a rich Buddhist heritage and we have been ruled by Buddhist kings for 450 years” he noted in an interview. (Two years ago) some miscreants came and destroyed 12 of our monasteries (in Chittagong hill tribe areas). Many of them came from across the border in Myanmar, Rohingya people, they were very ferocious”.

Ms Achariya Nanthakij, Corporate Affairs Manager of the Young Buddhists’ Association of Thailand is happy that China now sees the importance of Buddhism for community development. This meeting should be a starting point for everybody to get together to protect Buddhism,” she argues. We need to create networks between universities and the media to make the Buddhist voice heard around the world”.

Media coverage in the US gives the impression that the Buddhists are aggressors, when in fact they have been the victims of much violence (in Asia)” noted Mr Bob Isaacson, President of the Dhamma Voices for Animals, a US-based Buddhist organization that was approved as a ‘regional centre’ of the WFB at the meeting here. He supported a Sri Lankan resolution to set up a select committee on conflict resolution within the WFB.

One of the major components of the Baoji Declaration adopted at the end of the WFB meeting here was to strengthen networking between Buddhist organisations in order to play a greater role in social and welfare development to reduce inequalities and poverty, applying Buddhist principles of peaceful co-existence.

In an impassioned closing address to the conference, venerable Hsin Ting, a newly elected Vice-President of WFB from Taiwan praised the Chinese government for the support given to the conference. Venerable Hsin indicated that Taiwan and China can work together in Buddhist charitable work in Asia and beyond, and hinted that this could be a path for reconciliation between seemingly feuding neighbours (if the international media is to be believed).

China will become a great Buddhist country, I’m excited about it” he told the audience predicting that a great future lies ahead for Buddhism in Asia. As he stepped down from the podium, venerable Hsin was warmly greeted by venerable Chuanyin, the President of BAC. Taiwan has offered to hold the next General Conference of the WFB.

Dr Kalinga Seneviratne attended the WFB General Conference in China as an observer with the German Dharmadutta Society delegation from Sri Lanka.