The following is the resolution adopted by delegates of the World Fellowship of Buddhist at the 27th General Conference held in China. 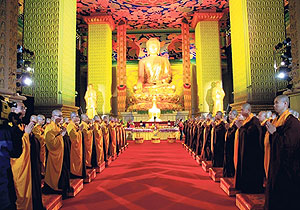 We, the participants from 40 countries and regions, attending the 27th General Conference of the World Fellowship of Buddhists (WFB) held from 16-18 October 2014 (BE 2557) in Baoji, Shaanxi Province, People’s Republic of China, with the theme of “Buddhism and Public-Benefit Charity”, would like to express our heartfelt gratitude and appreciation to the People’s Republic of China, the Shaanxi Organizing Committee, the Baoji Organizing Committee and the Buddhist Association of China for hosting successfully the General Conference and showing to the world the development of global Buddhism.

1. To appeal to the world community to strengthen their ongoing engagements in humanitarian and social welfare development, in order to reduce social inequality and poverty.

2. To pursue and establish peaceful and harmonious society through applying the teachings of the Buddha.

3. To promote inter-religious and inter-cultural understanding through dialogues to reduce mistrust and misunderstanding among the communities.

4. To urge all Buddhists to contribute to environmental sustainability through the mindful reduction of greed and through practicing green-consumption in their daily life.

5. To urge world communities to maintain respect of human values in order to uphold equality of human beings.

6. To encourage promotion of spiritual and religious practice irrespective of cultural or social backgrounds.

7. To work for the preservation of intangible and tangible Buddhist cultural heritages which are in danger in different parts of the world.

8. To promote moral and ethical education among Buddhist youth to support them to be humane and responsible global citizens.

9. To appeal to the international community to sustain their ongoing effort to provide educational and professional opportunities to underprivileged women to improve their quality of life.

10. To provide education and skill development to impoverished communities to help improve their economic and social circumstances.

We vow to work with all human beings to achieve human happiness through kind heart; social harmony through respect; world peace through reconciliation; and to promote goodwill through fellowship.

The World Fellowship of Buddhists (WFB) was founded on May 25 B.E.2493 (1950) in Colombo, Sri Lanka, where representatives from 27 countries in Asia, Europe and North America (including Hawaii) met for this purpose. Nearly every school of Buddhism in the Mahayana, Theravada, and Vajrayana traditions was represented by members of the Sangha as well as laity. This was probably the first time in the history of Buddhism that such a gathering was held. No Buddhist sect, school or organization was unwilling to attend the meeting. Thus founded, the WFB represents the common interests of Buddhists throughout the world numbering hundreds of millions. Group photograph of all participants taken at Famen Temple

The 27th General Conference of the World Fellowship of Buddhists was held at Baoji, Shaanxi Province, China from October 16 -18, 2014.

A Group photograph of all participants at this Conference was taken at the world renowned and extraordinary Famen Temple, Shaanxi Province on the morning of October 16, 2014. Buddhist leaders drawn from both the Maha Sangha (Buddhist clergy) and lay society representing more than 40 countries took part.