Shanghai, China -- Could China be bringing Tibetan Buddhism in from the cold? There are new signs that while a crackdown on Tibetan nationalism continues, the atheist state may be softening its position towards the religion - and even the Dalai Lama. 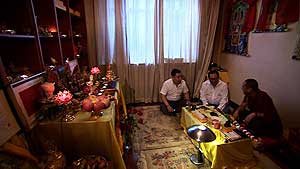 << Xiao Wunan, a former senior Communist Party official and Geshe Sonam next to Xiao's shrine in his apartment

That a former senior Communist Party official would invite the BBC into his home might, to most foreign journalists in China, seem an unlikely prospect.

Especially if that official was rumoured to have close links to the Chinese leadership and to have worked closely with the country's security services.

But the idea that such an official would then invite the BBC to witness him praying in front of a portrait of the Dalai Lama, would seem a preposterous one. Laughable - insane even.

That, though, is exactly what Xiao Wunan did.

Inside Xiao's luxury Beijing apartment, in pride of place atop his own private Buddhist shrine, sits a portrait of the exiled Tibetan spiritual leader, a man long reviled by the Chinese government as a dangerous separatist.

For Tibetan monks even the possession of the Dalai Lama's photograph is a risky proposition and the displaying of his portrait in monasteries is prohibited.

But there, beneath that same image sat Xiao, with a Tibetan Buddhist guru, Geshe Sonam, sitting beside him.

While the guru made it clear he was unwilling to talk about politics or the Dalai Lama, the 50-year-old Mr Xiao insisted it was really no big deal.

"In regard to the political problems between the Dalai Lama and China… we hardly pay any attention," he says.

"It's really hard for us to judge him from that angle. As Buddhists, we only pay attention to him as part of our Buddhist practice."

Xiao was introduced to the BBC by a Chinese businessman, 36-year-old Sun Kejia - one of an unknown, but reportedly growing number of wealthy Chinese, drawn in recent years to the mysticism of Tibetan Buddhism.

The increasing popularity of religion in general in China has been well documented and is often explained in terms of China's rapid economic expansion.

Millions of Chinese today may now have the kind of wealth that previous generations could only dream of, but economic growth has been accompanied by seismic social upheaval and many of the old certainties have been swept away.

"I was once confronted with great difficulties and problems in my business," Sun says.

"I felt they couldn't be overcome by human effort and that only Buddha, ghosts and God could help me."

So Sun became a follower not of merchant bankers or money managers, but monks - Tibetan monks in particular. And he has indeed since earned his fortune, which he estimates at more than $100m.

He now runs a chain of Buddhist clubs, and pays from his own pocket for Tibetan gurus like Geshe Sonam to come and preach there, giving them badly needed funds for their missions and monasteries back in Tibet.

But while Sun's invited guests - businessmen, party officials and property owners - find comfort and spirituality, he finds something else.

"What I want is influence," he says.

"My friends who come here are attracted to this place. I can use the resources they bring to do my other business. From that angle, it is also my contribution for spreading Buddhism. This brings good karma and so I get what I want."

And it seems to be working.

Sun invites us to meet other well-connected individuals who use his club.

Seated on the floor with Geshe Sonam is a woman who Sun says is connected through family ties to the highest echelons of Chinese politics.

She and a man she introduces as a senior official at China's National Development and Reform Commission, and who appears to be her driver, are placing watches, prayer beads and necklaces into the centre of the circle for Geshe Sonam to bless.

A luxury banquet follows the religious ceremony, and later the monk admits to being a bit uncomfortable with the whole thing.

"No matter how good the food is, it's still just food," he says.

"Sometimes it takes so long and I really feel I'm wasting my time. I become a bit anxious. But this can also be a way to preach. If I don't go here, or don't go there, would it be better for me to just stay in a cave and never come out?"

Given that China is still, officially, an atheist country, that may seem odd, especially because of the links between Buddhism and political activism in Tibet.

China however is not only allowing this Buddhist evangelism to take place but may now be actively encouraging it.

There have been reports that President Xi Jinping is - relatively speaking - more tolerant of religion than his predecessors, in the hope that it will help fill China's moral vacuum and stem social unrest.

And there have also long been rumours that members of the Chinese elite have been interested in Buddhism, including Xi Jinping's wife, Peng Liyuan.

The president's father, Xi Zhongxun, a Communist Party revolutionary and leader, is himself reported to have had a good relationship with the Dalai Lama before he fled China in 1959.

And that's perhaps where Xiao Wunan comes in, because another unsubstantiated rumour has it that his father was also close to the president's father.

Much of this is speculation, of course, but the important question is whether Xiao's permission for the BBC to witness him worshipping at a Buddhist altar is meant to send a signal.

Xiao had yet another surprise up his sleeve, handing the BBC some video footage of a meeting he had with the Dalai Lama in India - his place of exile - in 2012.

Formal talks were last held in 2010 but even they were only between representatives of the two sides.

Xiao's footage is rare evidence of face-to-face talks between the Dalai Lama himself and someone close to the Chinese government.

There were at the time a few unconfirmed newspaper reports about it in the Indian press, full of speculation about the significance, but there was never any official confirmation that it took place - until the BBC received the video.

At one point in the conversation the Dalai Lama tells Xiao he is concerned about the activities of fake monks in China.

"I am also concerned about this," Xiao replies. "Therefore, we are really in need of a Buddhist leader and that's why I think your holiness can play such an important role."

"Let's be honest, the Chinese government has been thinking like a crazy person on their Tibetan policy," he says.

"They haven't been facing up to it. This tough policy is not beneficial to China or to Tibetans and also gives China a very bad international image."

Xiao Wunan's exact role when he was in government is unclear - "just call me a former high official", he says.

He also insists that he was not acting as a Chinese government envoy when he met the Dalai Lama.

He says he was in India in his capacity as the executive vice chairman of an organisation called the Asia Pacific Exchange and Cooperation Foundation (APECF).

APECF is often described as being backed by the Chinese government and is involved in some pretty substantial influence building, including a multi-billion-dollar investment in developing a Buddhist site in Nepal.

Either way, it seems unlikely that any former senior Chinese official would be able to visit the Dalai Lama in India, or for that matter be filmed worshipping in front of his picture, without some pretty powerful backing in Beijing.

So what might it all mean? I put this question to Robbie Barnett, a Tibet specialist at Columbia University in New York.

Barnett advises against reading too much into Xiao Wunan's meeting with the Dalai Lama, but says it is nonetheless symbolic.

"I can detect no politically significant activities in that meeting," he says, "but it is significant as a symbolic indicator, a glimpse of a shift that might be under consideration in, or near, the policy-making heights of the Chinese system."

He suggests that Xiao's confidence in releasing the video does not necessarily mean he has the backing of the whole of the Chinese leadership, but that he probably has the backing of a powerful faction within it, at the very least.

"We know it is meant to symbolise something," Barnett says.

"They want us to see that something might be happening, that a debate may be taking place."

There can be little doubt that the ban on the portrait of the Dalai Lama and the tightening of Chinese control over the past two decades have served to heighten tensions in Tibet.

Throughout that period there have been talks between the two sides, both formal and informal, but little has changed.

In recent months, however, some reports suggest that the unofficial dialogue has become more substantial, even raising the possibility of the Dalai Lama being allowed to return from exile for a historic visit.

So, should the release of the video by Xiao Wunan be seen as evidence that Xi Jinping really is changing China's approach to Tibetan Buddhism, or is it simply a smokescreen, designed to give the appearance of a softening line, while the harsh crackdown in Tibet continues?

If nothing else, Xiao Wunan and his Dalai Lama shrine appear to be proof that well-connected members of the Chinese elite are now taking an active interest in Tibetan Buddhism - and that monks are now being given license to encourage them.

"They may not be able to buy their way into Nirvana," Geshe Sonam says, "but in Buddhism, you can get more karmic reward the more money you spend on rituals."