Hong Kong, China -- State media controlled by the ruling Chinese Communist Party has warned two Hong Kong superstars that they could be at the receiving end of a boycott in mainland China after they sat close to two key figures in the entourage of exiled Tibetan spiritual leader the Dalai Lama at a recent religious event. 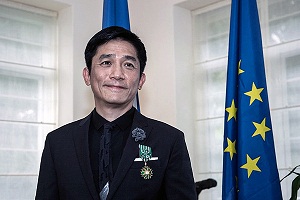 << Hong Kong actor Tony Leung receives the distinction of officer of the Order of Arts and Letters at the French Residence in Hong Kong, June 8, 2015. AFP

The official website China Tibet Online published an article on Wednesday hitting out at singer and actress Faye Wong and actor Tony Leung, for sitting close to two key supporters of exiled Tibetan spiritual leader the Dalai Lama at a Tibetan Buddhist event in India recently.

"As public figures, celebrities should exercise greater discretion [than ordinary people] in word and deed to be worthy of the name," the article said, including a third star, mainland Chinese actor Hu Jun, in the criticism.

Wong, Leung and Hu were shown in photos of a Feb. 14 event in Bodh Gaya marking the 92nd anniversary of the birth of the late predecessor of the 17th Gyalwang Karmapa, Tibetan Buddhism's third-highest spiritual leader.

The presence of the three along with one of the ministers of the Central Tibetan Administration and speaker of the Tibetan parliament-in-exile was "coincidental," a spokesman for the Karmapa's office told the Associated Press.

The Tibet.cn article said: "Mixing with leaders of the 'Tibetan independence' clique goes far beyond the bounds of merely exercising the freedom of religious belief."

Beijing rejects the Dalai Lama's call for a "middle way" solution of a semiautonomous Tibet under Chinese rule, and accuses him and his supporters of campaigning to split Tibet from the rest of China.

The article added: "It is possible that they simply made a blunder ... and simply didn't know who they were with."

"In that case, it would be a shame if they were to lose their reputations, which they have worked so hard for so many years to earn," the article said, before listing a number of celebrities who have drawn the ire of Beijing and mainland Chinese netizens in recent years, including Anthony Wong, who supported the 2014 pro-democracy movement in Hong Kong.

It also cited the case of Taiwanese singer Chou Tzu-yu, 16, who apologized publicly for waving the Taiwan flag on a television show.

"If they choose to take all the 'freedoms' that being a celebrity offers, then they will have to swallow the consequences," the article warned.

Hu Jun responded soon after the article was published with a disclaimer on his Sina Weibo account.

"I was totally unaware of the presence of the so-called head of a separatist group as mentioned in some reports," Hu tweeted. "I do not know any separatists ... [and] I oppose any words or deeds that divide the country!!!"

The three are not the first stars to irk Beijing over perceived support for the Tibetan cause.

Last year, Chinese authorities canceled a planned tour by U.S. bands Bon Jovi and Maroon 5 after being associated with the Dalai Lama.

Since then, dozens of official media and entertainment organizations have signed a pledge to uphold self-discipline and professional ethics, which included supporting the leadership of the Communist Party.