Beijing, China -- In a move intended to bolster his profile and religious authority, the controversial Chinese-appointed Panchen Lama, Gyaltsen Norbu will conduct the Tibetan Buddhist ritual called Kalachakra (1) in Tibet between 21 and 24 July. The ceremony tomorrow will be the first time that Gyaltsen Norbu (Ch: Gyaincain Norbu) has conducted the Kalachakra ritual, one of the most important in all of Buddhism. It will also be the first time that it has been carried out inside the heavily-policed Tibet Autonomous Region for 50 years. 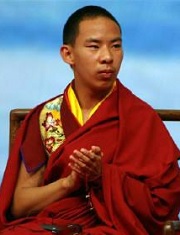 “The officially atheist Chinese government has long tried to impose its authority on Tibet by co-opting Tibetan Buddhism. Its decision to have Gyaltsen Norbu preside over a ritual as important as the Kalachakra marks a stepping up in these efforts. His presence in Tibet tomorrow on such a prestigious stage will be the culmination of years of political and religious grooming – none of which will grant him legitimacy in Tibetan eyes”.

The ceremony has added significance because it will take place at Tashi Lhunpo Monastery in Shigatse, southwest Tibet (3), which has been the official seat of the Panchen Lama throughout Tibet’s history. China’s Panchen Lama ordinarily lives in Beijing, where he was brought up and educated by the Chinese authorities, and rarely visits Tibet. He has been given an increasingly high profile political role by Beijing in recent years, including being appointed as a member of the Chinese People’s Political Consultative Conference. In 2015, he was reported to have told a senior Communist Party meeting in Beijing that he would "resolutely uphold the unity of the motherland and its people" (4).

This move is in keeping with Beijing’s wider policy of seeking control over religion in Tibet. Members of the Chinese government have stated on several occasions that they have authority over Tibetan Buddhism, which is a key aspect of the Tibetan struggle against the Chinese occupation (5). They claim that this authority extends to choosing the next Dalai Lama, something that Tibetans refuse to accept (6). According to reports unconfirmed by Free Tibet, authorities in Shigatse are compelling Tibetans to attend the event (7).

“Gyaltsen Norbu is known as the “fake” Panchen Lama among Tibetans for a reason: he was handpicked by China, educated in China and lives in China, distant from the occupation that Tibetans face on a daily basis and insulated from the multitude of injustices that they must struggle against. Tibetans do not recognise his authority and instead demand to know what happened to the real Panchen Lama, missing now for 21 years.

“His presence at this Kalachakra stems from the Chinese occupation rather than from genuine religious legitimacy. This is not the Panchen Lama that Tibetans want to see.”

Notes
---------
(1) Kalachakra, meaning ‘wheel of life’, is one of the most important rituals in Tibetan Buddhism. Tibetan Buddhists believe that the ritual will activate the seed of enlightenment lying dormant in their minds. It has been conducted by the Dalai Lama outside of Tibet but this will be the first Kalachakra ceremony to take place in 50 years inside the Tibet Autonomous Region.

(2) The Tibetan Panchen Lama, Gedhun Choekyi Nyima, who was appointed by the Dalai Lama in 1995, has been missing for 21 years after being abducted by the Chinese government. Tibetans continue to demand that China explains his whereabouts and condition.

(6) Time, 13 March 2015, China Says It Will Decide Who the Dalai Lama Shall Be Reincarnated As http://time.com/3743742/dalai-lama-china-reincarnation-tibet-buddhism/;

Beijing’s attempts to co-opt Tibetan Buddhism by restricting the activities of its monks and monasteries, and by selecting the next Dalai Lama, are the subject of Free Tibet’s briefing on religious freedom in Tibet (http://www.freetibet.org/files/Beyond%20Belief%20-%20Religious%20freedom%20in%20Tibet%20-%202016%20Free%20Tibet_0.pdf) and its ‘Beyond Belief’ campaign (http://www.freetibet.org/news-media/na/new-campaign-against-chinas-dalai-lama-plan).