Sichuan, China -- Chinese authorities are reportedly forcing at least 1,000 religious adherents to withdraw from two major Tibetan Buddhist institutions, Human Rights Watch said today. The government should resolve genuine safety and health issues at the Buddhist institutions without infringing on the rights to religious belief and freedom of movement. 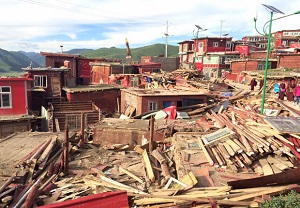 The evictions follow demolitions in late July at the Tibetan Buddhist institute Larung Gar in Serta (Ch.: Seda) county, Kardze (Ganzi) prefecture in Sichuan province. The demolitions, which the authorities said were necessary in order to carry out “correction and rectification,” reportedly prompted three suicides.

At least half of the more than 10,000 monks and nuns at Larung Gar, believed to be the largest Buddhist teaching institution in the world, face eviction following the demolition of numerous residences. The authorities have also pressured family members of certain nuns at Larung Gar and Yachen Gar, another major religious institute, to summon their relatives home or face punishment.

Since mass demolitions began at Larung Gar, the monastery’s leaders have appealed to residents to avoid confrontations with government-employed demolition crews.

However, three nuns at Larung Gar committed suicide in late July or early August in protest of the mass demolitions. Two of the nuns, Rinzin Drolma and Tsering Drolma, left notes referring to the demolitions or to government “harassment,” according to several media reports. An unconfirmed media report noted that another nun attempted suicide but was saved by friends.

During the first week after the demolitions began, government workers at Larung Gar reportedly demolished 600 of the nuns’ cabins and homes, and since then an estimated 2,000 total dwellings have been removed. The demolition work is reportedly completed for this year but is expected to resume next year, according to a source.

Before the demolitions began, an estimated 1,500 police and paramilitary troops were moved to nearby villages and towns. The authorities have banned tourists from visiting Larung Gar and local residents from taking photographs or video of the demolitions. Those who have sent images or information abroad have come under investigation from the authorities. Images of the demolitions published in early August show some hillsides covered with debris, with no standing structures.

The threat facing residents at Larung Gar stems from a local government order to the monastery instructing it to reduce the number of monks and nuns to a total of 5,000 by September 2017. This means that at least 5,000 other residents – likely several times that figure – will be forced to leave, whether or not their housing survives.

So far the demolitions at Larung Gar have focused on the homes of nuns, apparently because they are presumed less likely to put up active resistance. Although some nuns will be allowed to move into new solid-structure dormitories built by the monastery, it is not yet clear how many will be allowed to stay. One report claimed that up to 2,000 nuns had been required to leave Larung Gar and return to their hometowns in other provinces.

Since about April, up to 1,000 nuns at Yachen Gar, another major monastic encampment in Pelyul (Beiyu) county, Kardze prefecture in Sichuan province, have been compelled to leave the institution and return to their homes in the Tibetan Autonomous Region (TAR), west of Yachen Gar. Yachen Gar, about 300 kilometers southwest of Larung Gar, has an estimated 10,000 residents, mostly nuns. It has not experienced major demolitions except for some associated with a road construction project, and, unlike Larung Gar, it remains open to foreign tourists.

The Yachen Gar evictions were carried out not by local authorities, but by officials in the TAR. TAR officials have pressured the families of nuns from the TAR to return immediately to their registered homes or face serious punishments, such as confiscation of family identity cards. The media reported that monks and nuns at Larung Gar from Chamdo and Nagchu prefectures in the TAR have been similarly ordered by TAR authorities to return to their places of registration. Yachen Gar residents from areas outside the TAR have not been threatened or ordered to leave.

An informed source said that nuns who have returned from Yachen Gar to their homes in the TAR have been told that they are not allowed to join any monastery or nunnery there, or carry out public religious rituals or practices. It is unclear if the returned nuns are allowed to travel again, but all Tibetan nuns and monks face exceptional restrictions on travel outside their locality, usually requiring special letters of guarantee from local officials and police.

The Chinese authorities have previously expressed concerns about fire and other structural risks at the Larung Gar community, which they have a responsibility to address. However, resolving legitimate safety and health concerns cannot be a pretext for reducing the size of a religious community or compelling religious adherents to leave. The right to freedom of religious belief is recognized under article 36 of China’s constitution. The Universal Declaration of Human Rights protects both the right to freedom of religion “either alone or in community with others” (article 18), and the right to freedom of movement and residence within a country’s borders (article 13).

There are unconfirmed reports that officials plan to offer compensation of up to 20,000 yuan (US$3,000) to those forced to leave Larung Gar or whose homes have been demolished. No such compensation has been offered to nuns forced to leave Yachen Gar. While such payments lessen the financial cost to those uprooted by the government’s actions, they do not address the serious violations of basic rights to freedom of religion and movement suffered – violations that would be better addressed by permitting improved and expanded residential facilities at the Buddhist institutions.

Human Rights Watch urged Chinese authorities to immediately investigate reports that TAR officials are threatening family members of monks and nuns to compel their relatives to leave their chosen places of religious study. The government should also allow any nuns forced to leave Yachen Gar or other religious institutions to continue their religious activities.

“The authorities’ strategy of demolitions, expulsions, threats, and restrictions on religious practice is clear-cut evidence of an attack on religious freedom, not the actions of a genuinely concerned government trying to address a housing problem,” Richardson said.
TOP