BEIJING, China -- Four Chinese Buddhists will follow the trail of Monk Xuan Zang of the Tang Dynasty (618-907), and present the Indian Nalanda Buddhist temple with a Chinese Buddhist master piece. 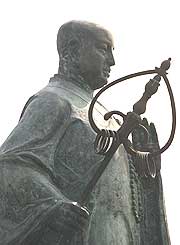 Shi Xuecheng, vice-chairman of the Buddhism Association of China, told reporters here Monday that the four Buddhists will be selected from the Chinese mainland, Taiwan, Hong Kong and Macao. They will undergo six months of bitter walking across west China, Pakistan and Nepal, and eventually arrive in Nalanda, where Monk Xuan Zang once lived and studied.

"Buddhism originated in India and was highlighted in China," Shi said. Monk Xuan Zang went to India some 1,300 years ago and now, in return, the Chinese will present India with Chinese Buddhism thinking. The move is of great significance in cultural and religious communication between China and India.

Monk Xuan Zang devoted his entire life to learning Indian approaches to Buddhism and spreading Chinese culture, Shi said. "To follow his trail is to explore the cultural heritage of both China and India, and the great thoughts of our ancestors who cherished peace and love."

In the late autumn of 628, Monk Xuan Zang started his brave journey to South Asia. He walked 25,000 kilometers and spent 19 years of his life learning Indian Buddhism. Nowadays, he is seen as a front-rank scholar by Indian Buddhists and his story is even written into Indian primary school textbooks, Shi said. Thanks to his efforts, China and India have a long history of diplomatic ties that can be traced back to the Tang Dynasty.