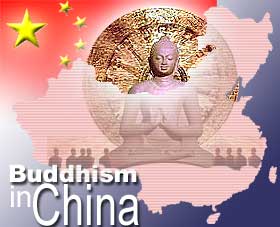 Some 1,000 monks and experts on Buddhism from about 10 countries and China, Hong Kong and Taiwan will descend on the scenic city of Hangzhou in the eastern province of Zhejiang for the World Buddhist Forum opening on April 13.

"Religion will play a big role in China's creation of a harmonious society," Xiao Wunan, vice-chairman of the World Buddhist Peace Foundation, told Reuters when asked if the forum indicated a greater official tolerance for religion.

A theme of the forum printed on brochures reads: "A harmonious world begins in the mind."

Hu has launched a campaign to build a "harmonious society" as Chinese society has become more diverse but also more unequal. The government continues strict curbs on religious practice, but has also sought to fend off international criticism by underscoring the country's diversity of beliefs.

Many Catholics worship in underground churches and Protestant preachers have been detained for peddling unauthorized versions of the Bible.

The government is generally less fearful of Buddhism with its home-grown roots, but maintains tight control on monasteries, especially in Tibet where nuns and priests have been jailed for expressing sympathy with the exiled Dalai Lama.

It was unclear whether Hu or the Communist Party's 24-member decision-making Politburo had given their blessings to the forum, organized by China's Buddhist Association and the China Association for Religious and Cultural Exchanges.

"Government support for such a big event is very important," Xiao, a 41-year old convert to Tibetan Buddhism, said in an interview. He declined to elaborate or confirm whether any member of the Politburo would attend.

Observers said the forum in Hangzhou was a low-risk move that could help counter damage to Hu's and China's image caused by government crackdowns on journalists, Internet writers, civil rights campaigners and academics in the past year.

"My guess is it needs Hu's approval ... It'll change his image but it's also the safest, the least troublesome and an easy event to control," said Xu Youyu, an expert on philosophy at the Chinese Academy of Social Sciences, a government think-tank.

The four-day forum is to move on April 15 to nearby Zhoushan, where delegates will pray for world peace.

Hu's policy on religion appears to extend changes made by his predecessor, Jiang Zemin, who banned the Falun Gong spiritual movement and jailed thousands of adherents but also sought to raise the profile of officially approved religions.

Under Jiang, China refused to recognize the boy chosen by the Dalai Lama as the reincarnation of the second holiest monk in Tibetan Buddhism and anointed its own Panchen Lama.

China's atheist Communist leaders are deeply suspicious of religion and see it as a tool to help control a population of 1.3 billion, the biggest in the world. But the end of Mao Zedong's personality cult after his death in 1976 has left an ideological vacuum which the party has been unable to fill.

Two of the top lamas of Tibetan Buddhism will be absent from the forum. The Dalai Lama has lived in exile in India since 1959 when he fled his Himalayan homeland after an abortive uprising.

The Karmapa Lama, the third ranking monk in Tibetan Buddhism, joined the Dalai Lama in India in 1999.

"The time is not ripe. But we do not rule out the possibility in the future," Xiao said when asked why they were not invited.

It was unclear whether the Beijing-anointed Panchen Lama, ranked second behind the Dalai Lama, would attend. The boy chosen by the Dalai Lama has disappeared from public view.