The Dalai Lama has said he wants a 'middle way' rather than independence for Tibet, but the Chinese authorities accuse him of lying

Lhasa, Tibet (China) -- China's new top official in Tibet has started a campaign to stamp out allegiance to the exiled Dalai Lama and to extinguish religious beliefs among local government officials. 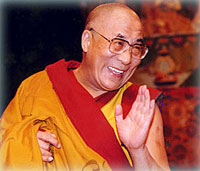 Zhang Qingli, the Communist Party secretary to the Tibetan Autonomous Region, is cracking down on Buddhism. Ethnic Tibetan officials in Lhasa as well as in surrounding rural counties have been required to write criticisms of the Dalai Lama.

Senior officials have been ordered to write 10,000 word condemnations of the exiled ruler, while junior posts need only produce 5,000 character critiques.

The Dalai Lama has said he does not seek full independence from China, but a recent full page diatribe in the 'Tibet Daily' newspaper accused him of treason.

"What he pursues is a swindle and nothing stands between his 'high-level autonomy' and 'Tibetan independence'," it reported.

The latest attacks cast doubt over the future of negotiations between the Dalai Lama's envoys and the Chinese government over his possible return to Tibet. Talks had resumed in 2002 but have made little progress so far.