LHASA, Tibet (China) -- In the courtyard of the 15th century Sera monastery in Lhasa, a hundred purple-robed monks are seated in clusters beneath trees that sway in the afternoon breeze. 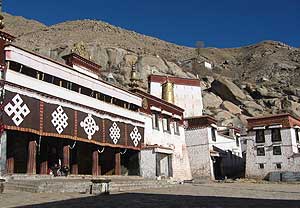 You would expect the congregation to melt in with the slow mood of the setting and spent an afternoon in prayer, but what unfolds is far more lively.

The air is thick with voices in discussion, broken, every now and then by loud and dramatic claps and the flamboyant swirling of prayer-bead chains. So vivid is the scene that a visitor could be excused for thinking that the monks, most of whom were once famous for their martial arts skills, and some of whom had even planned coups against the Regent, were nursing plans for another uprising…

But, it is only an ancient Tibetan Buddhist lama ritual being played out spiritedly — it is the Sutra debates. For all the solemnity of the debates, their mechanics resemble nothing so much as a pantomime. And, the topics vary, depending on the level of academic proficiency.

For example, monks who are studying logic could debate such many-layered questions as: “If all things are composed of the four elements of earth, water, fire and wind, where is the fire in an ice cube? And where is the water in a flame?”

The monk who poses the question stands over the others in a group. In one sweeping motion, much like a baseball pitcher’s arc, he leans back and then throws his body forward.

Then, he brings his hands together in a loud clap, in a gesture that is loaded with meaning. The other monks in the cluster are allowed to answer the question either individually or in a group.

When an inconsistent answer is given, the questioner loudly proclaims the absence of logic, thereby scoring a philosophical point for that round.

The Sera monastery was, from 1419 to 1950s, one of the leading schools of Tibetan Buddhist philosophy and tantrism.

When Chinese troops “liberated” Tibet, the monastery housed nearly 10,000 monks. After 1959, when the Chinese decisively took control after a failed uprising, the lamas were forced to leave the monastery.

It was converted into an army barrack. The monks returned in the early 1980s after the Chinese government reconsidered its policy on the practice of traditional religion.

Now, the monastery has been reduced to a shadow of its former self. Once upon a time, every Tibetan family sent at least one child to Sera for scriptural learning. Today, there are less than 1,000 monks at the monastery.

Moreover, the distinctions in the various strands of philosophical teachings have been done away with and monks are sworn never to engage in anything remotely political.

An echo of the Sutra debates in Lhasa can be heard at Bylakuppe in Karnataka, where Tibetan monks in exile built a replica of the Sera monastery in 1970. That monastery imparts educational and teaches rituals along traditional lines, and even grants
degrees.

The Sutra debates in the Sera monastery may convey the impression that lama orthodoxy is an unvarying, ageless tradition. Yet, on the streets of Lhasa, the monks seem to be well in step with the times.

Around the Jokhang monastery, for instance, you can see monks handling the latest mobile phones or the digital camera with ease. If you are lucky, you can even spot a monk doing the “mall crawl”!