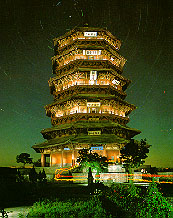 There is an obvious tilt between the first and second floors of the Sakyamuni pagoda in Yingxian city, an expert said. There are also 300 places in the pagoda that are in need of repair, he said.

At 65.86 meters, the pagoda is said to be the tallest wooden pagoda in the world. "We are worried about the ancient pagoda's safety," Xinhua news agency quoted the expert as saying.

A special organisation has been formed to prepare a plan to repair and protect the structure. Built in 1056 and located some 380 km from Beijing, the nine-storey pagoda is a superb example of ancient China's building and carpentry techniques.

The 950th anniversary celebration scheduled for September five is expected to attract 30,000 people, the report said.