BEIJING, China -- The mysterious world of the Shaolin monks is ready to throw itself open to academic scrutiny, according to temple abbot Shi Yongxin. 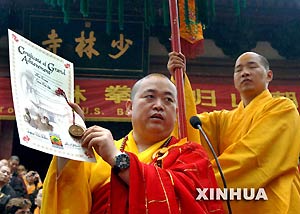 "The history of Shaolin is closely related to Chinese politics, society, religion, economy and culture. People should research Shaolin just as they study A Dream of Red Mansions," Shi Yongxin, Shaolin abbot said in an international seminar on Buddhist Culture in the Yuan Dynasty Thursday.

To develop academic study on the Shaolin, Shi Yongxin said the temple plans to strengthen its cooperation with academia, especially scholars specializing in history and Buddhism.

With around 1500 years of history, the abbot said the sect is worthy of research because it has contributed so much to Buddhism and Chinese culture.

Jinan University History Professor Ma Daming also responded positively. She said the Shaolin temple is no longer an ordinary temple, but an important symbol of Chinese culture, an amalgamation of tradition and religion. She believes people should support its development.