Abbot: Shaolin Temple needs to keep up with times

Beijing, China -- The Shaolin Temple, widely considered the birthplace of Chinese Kungfu, has frequently been in the spotlight following some headline-grabbing events, such as the super-girl-style Kungfu Competition, a luxury sports car awarded to the temple, and the latest Wushu festival, with Shi Yongxin, the abbot, at the core of it. 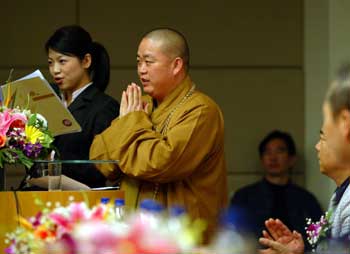 << Shi Yongxin, abbot of Shaolin Temple, at the news conference for the launch of 'The stars of Chinese Kongfu Contest' in Beijing, China March 30, 2006. 108 contestants well-versed in the art of kungfu will be then chosen to act in the teleplay 'Shaolin Temple'. [newsphoto]

Shi was admitted to the Shaolin Temple in 1981, when the temple was in a stark recession with only a dozen monks living on 28 mu (about 1.86 hectares) of farmland. He began to act as abbot in 1987 at 22, five years after the internationally acclaimed martial arts movie 'Shaolin Temple', starring Hong Kong movie king Jet Li, which put Shaolin Kungfu as well as the temple in the international spotlight.

Ever since his inauguration, Shi has stressed the importance of cultural exchange with foreign countries, and has carried out a series of reforms to expand the influence of the temple, securing international renown for the temple and making it a pillar of the tourism industry in Dengfeng where it is located.

In spite of his success in gaining unprecedented attention for the Shaolin Temple, people are questioning whether the temple remains a holy place of Zen Buddhism or has become a commercialized tourist site, and whether the abbot is hero for his reforms or a temple CEO stinking with money.

So what's really behind the temple boss's actions?

During an interview on the program 360 Degree on CCTV News Channel on Tuesday, Shi Yongxin expressed his philosophy of keeping up with the times in running the temple with a commercial touch.

"I believe everything I have done in the past two decades is necessary and followed the trends of times. For example, in the past, one only had to deal with a small neighborhood in order to get something done. But now one has to deal with the whole world, which is closely connected through mass media, such as the Internet. As a result, we have to take the times and globalization into account, and try to keep up with them." said Shi.

When Shi took over the temple as abbot 20 years ago, it was a little-known ancient temple. Today, the temple has under its flag a special liaison office, a temple affairs office, a website, and two commercially-run companies, and the abbot is often hailed as the 'CEO' of Shaolin Temple.

Three years ago in a piece called 'The New Shaolin Abbot' that ran on the American 'Discovery' channel, Shi was dubbed the 'CEO' of the temple.

Shi, however, claimed commercialization is not a bad thing, adding that without commerce, he circulation of goods and services would not be possible, and society would regress into a primitive state.

"It is true that I am resorting to commercialization to promoting the Shaolin culture," Shi said. "But I believe people who concentrate on hard work can understand me."

Back in 1993, Shi Yongxin took a ham manufacturer to court for promoting the ham under the brand "Shaolin," which he claimed constituted a trademark infringement. It was the first case on brand rights in China's religious circles.

Recalling the lawsuit, Shi said, "a long time ago, communication and transportation were not as convenient as today, and products were circulated in a limited area, so trademark registration was not required. With globalization comes infringement. To protect the trademark, we have to register the brand 'Shaolin.' The registration is totally protective. "

However, the Shaolin Temple brand is being taken advantage of by other businessmen. About 200 meters north of the temple, the local tourist bureau has built the Shaolin Temple Martial Arts School, and right across from that is a Zen institute that is backed by a salt company.

Many suspect such commercial aspirations will disturb the tranquility of the temple. Shi, however, believed such establishment is a result of the interplay between business and brand, likening Shaolin Temple to the American Disneyland, which is a brand as well as a business.