Lhasa, Tibet (China) -- The Tibetan Centre for Human Rights and Democracy (TCHRD) received confirmed information from reliable sources that, in mid May 2007 Chinese People's Armed Police (PAP) demolished a colossal statue of Guru Padmasambava popularly known as Guru Rinpoche of the Samye Monastery and that rubble from the statue's destruction is being transported to unknown location according to reports emanating from the area. 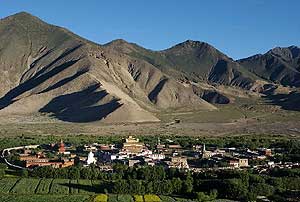 Coinciding with the Buddhist holy month of Saka Dawa, a convoy of Chinese PAP came to the Samye Monastery, Dranang County, Lhoka Prefecture, Tibet Autonomous Region 'TAR' and forcibly demolished a nearly completed huge gold and copper plated statue of Guru Padmasambhava. The statue was constructed with the fund of about 800,000 Chinese Yuan generously donated by two Chinese devotees from the highly industrialized Mainland city of Guangzhou in Guangdong Province. The sponsors and the local people were reportedly highly disappointed and saddened by this unthinkable act of demolishing a structure of such religious importance.

Samye Monastery is located at the bank of Yarlung Tsangpo River at Dranang County in Lhoka Prefecture "TAR" and is believed to be the first Tibetan monastery ever built in Tibet in the year 779 under the able supervision of Tibetan King Trisong Detsen. It was then handed over to the famous Buddhist master Padmasambhava continued the construction of the monastery.

In order to cover up the information from being leaked outside, the Chinese PAP accordingly quickly barred pilgrims, devotees and foreign tourists from visiting Samye Monastery. A huge network of Chinese PAP were deployed around the monastery area. Few local Tibetan devotees after questioning the monks of the monastery about the demolition did not dare to disclose any information. On being asked, the monastery officials told the devotees that the statue was demolished because a new religious structure cannot be built without official consent. One local Tibetan told TCHRD that, "Tibetans in Lhoka, particularly in Dranang County did not dare to challenge the officials openly but deep inside their heart, people fear and worry that the demolition of Guru Rinpoche's statue and transportation of its rubble bear a resemblance to the dark era of the Cultural Revolution."

On 1 January 2007, a new "Measures for the 'Regulation on Religious Affairs'" with 56 articles, issued by the 11th Standing Committee of the "TAR" People's Government on 19 September 2006, entered into force. This new regulation, instead of providing the protection of religious affairs, aimed at enforcing compliance with government regulations and policies on religious organizations, religious personnel, and religious citizens. In particular, this new regulation empowers the officials with legal backing to intensify restrictions and subjected to state control and repression.

As a reinforcement, Article 48 states that, "Where, in violation of provisions in Article 13 of these measures, a religious structure such as an outdoor religious statue, stupa, or mani lhakhang [prayer (wheel) temple] is built without authorization outside of a venue for religious activity, the people's government religious affairs department at the county level or above orders redress, suspension of construction, and demolition within a specified time limit, in accordance with relevant laws and regulations."

TCHRD believes that this latest incident of demolishing Guru Padmasambhava's statue in the Samye Monastery not only highlights new measures being announced but also being forcibly implemented thereby violating the fundamental human rights of Tibetan people's right to religious freedom. TCHRD fears that the same measure will be undertaken across religious institutions in Tibet in the coming days.

Severe restrictions on political and religious activities are authorized at the highest levels. The latest measures signal that a prospect for more religious freedom as gallantly pronounced in the Chinese constitution is bleak, considering China's record with respect to the religious freedom.
While China's constitution provides its citizens with the "freedom of religious belief," it does not protect the right to manifest religious beliefs, highlighting the importance for China to ratify the International Covenant on Civil and Political Rights (ICCPR), which contains explicit provisions on the right to freedom of thought, conscience and religions and which she signed on 5 October 1998.

As China continues to reach out to the world, beefing up scores of political contacts, emerging as an active player in the international arena, preparing to showcase her strength by hosting Olympic games next year, expanding her influence and refining it diplomacy to become one of world’s great powers, the free world must remind itself that it has a responsibility to ensure that China respects human rights of its own people, the Tibetans and others within its territory.