LHASA, Tibet -- Tens of thousands of Tibetans and visitors flocked to the Zhebung Monastery in the western suburbs of Lhasa, capital of southwest China's Tibet Autonomous Region, on Sunday to celebrate the opening of the annual Shoton (Yogurt Banquet) Festival. 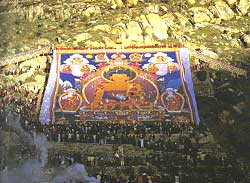 A 35-by-30-meter Thangka painting bearing the image of Sakyamuni (picture, left), founder of Buddhism, was unveiled at 8 a.m. on the hillside next to the monastery amid acclamations from spectators, marking the beginning of the traditional festival that is believed to originate in the 11th century.

Zhang Ran, a 20-year-old Chinese student who studies in Japan, said: "I've been standing here on the hillside for more than six hours, just to see the huge traditional Thangka painting. It is exhausting, but it is totally worth it. I have never seen anything this fascinating, even though I am not a Buddhist."

Shoton, or Xodoin, means yogurt banquet in the Tibetan language, and the Shoton Festival, originally a religious activity for pilgrims to serve yogurt to monks and nuns who finished their summer retreat, had gradually become a theatrical event by mid-17th century.

Also known as the Tibetan Opera Festival now, it is held each year from the end of the sixth month to the middle of the seventh month on the Tibetan calendar.

The Shoton Festival was inscribed on the list of China Intangible Cultural Heritage in May last year.

Citizens in Lhasa will enjoy a week-long holiday for the festival this year, which will also feature Tibetan opera performances, yak races, and other activities including auto and real estate exhibition, said Zhou Junjie, deputy secretary-general of the city government.