Lhasa, Tibet -- Every day, hundreds of Buddhist pilgrims prostrate themselves in front of the Jokhang Temple, the spiritual heart of the Tibetan capital Lhasa. 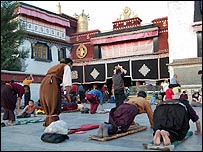 Their devotion is sometimes literally etched on their faces: many carry marks on their foreheads from constantly lying face down on the floor.

China says more than one million pilgrims visit Lhasa each year - evidence, it says, that the Chinese authorities are protecting religious freedom in Tibet.

But the real picture is more complex. Although people can worship openly, Beijing maintains ultimate control over Tibetan Buddhism.

An example of this control came earlier this month when China's State Administration for Religious Affairs issued new guidelines about who can and cannot be declared a "living Buddha".

From 1 September, all reincarnated living Buddhas - eminent monks - will first have to be approved by the government.

The guidelines appear directed at the selection of the next Dalai Lama, Tibetan Buddhism's spiritual head.

The current Dalai Lama, the 14th, has lived in exile in India since fleeing his homeland in 1959 along with thousands of other Tibetans after a failed uprising against Communist rule. Tenzin Gyatso is now 72.

China's new ruling on reincarnation also seems designed to prevent exiled Tibetans who have fled the region from helping to select their spiritual leader.

Article 2 makes it clear Beijing will not tolerate "interference" from any person or organisation outside the country.

If there are succession problems when the Dalai Lama dies, it will not be the first time there have been difficulties over the selection of a reincarnated monk.

When the 10th Panchen Lama - second in seniority only to the Dalai Lama - died in 1989, the search began for his successor.

In 1995, the Dalai Lama announced that six-year-old Gedhun Choekyi Nyima had been selected. Three days later he disappeared with his parents.

Nyima Tsering, vice-chairman of the Tibet Autonomous Region, told the BBC that this Panchen Lama, now 18, is still in Tibet, living a quiet life.

"He wants to live in peace and does not want his life disturbed," said the official, although China does not allow anyone to see him.

Instead, Beijing approved another Panchen Lama. He lives mostly in Beijing, travelling to Tibet every year or so.

China seeks to control the selection of senior religious leaders in Tibet because it fears their political power.

Although Beijing says Tibet has been part of China since the mid-13th century, eight centuries on there are still many who dispute that claim.

The Dalai Lama "is not only a religious figure. He is also a political figure agitating for Tibetan independence," said Nyima Tsering.

Religious and political issues remain mostly under the surface in Tibet. Senior monks are wary when talking about sensitive issues.

It is like saying the Pope is just another Catholic.

But scratch the surface and it is not hard to find political tension.

"The Dalai Lama is in here," one Tibetan in Shigatse told the BBC as he pointed to his heart. "But we cannot speak about him."

There have also been reports this month that the Chinese authorities are cracking down on pro-Dalai Lama sentiment in Tibet by sacking ethnic Tibetan officials.

China has worked hard to promote the view that it governs Tibet with a light touch.

Since 1951, when it reasserted its control of Tibet through what it called "peaceful liberation", Beijing says it has spent more than 1 billion yuan ($132m, £66m) restoring cultural sites.

People, it says, are free to worship and express their views.

"We do not have any political prisoners," said Nyima Tsering.

But it seems odd that in the Tashilunpo Monastery there are pictures of a smiling Chinese President Hu Jintao, but none of the Dalai Lama.

There might be political and religious freedom in Tibet, but it is a freedom severely curtailed by Beijing.