Rare protest as Tibetans attempt to save Buddhist statue from demolition

Mt Kailash, Tibet (China) -- New eyewitness accounts have revealed that local Tibetans attempted to prevent the demolition of a statue of Guru Rinpoche (Padmasambhava) near Mt Kailash in the Tibet Autonomous Region (TAR) on September 28. 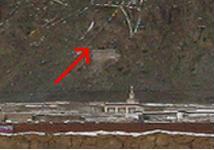 << Photo of the remaining statue base (center, in the rock face) after the destruction of a Guru Rinpoche (Padmasambhava) statue at Darchen, Tibet. Photo provided by a group of tourists visiting the area at the time.

Approximately 20 Tibetans were seen forming a human shield around the two meter high statue before they were dispersed and the statue demolished by armed security personnel.

The risk taken by the Tibetans in trying to protect the statue indicates the distress and resentment among Tibetans at the demolition of a significant representation of their religious culture.

There has been a trend towards the tightening of control over religion in Tibet, and the destruction of the statue at Darchen, at the beginning of the pilgrimage route around one of Asia’s most sacred mountains, Kailash, is a further example of the aggressive enforcement of wide-ranging new regulatory measures introduced in the TAR in January 2007.

A tourist who witnessed this rare attempt by Tibetans to protect the statue told ICT: "We heard a rumor that the army was going to destroy a large Buddha at the edge of town. From our vantage point it was clear that a group of perhaps 20 people were in fact in place around the Buddha [the Guru Rinpoche statue] forming a human shield.

The mood was tense. [Later] a Tibetan woman pulled me aside. In broken English and with tears running down her face she said that the Chinese were no good - that they were going to destroy the Buddha - and that I should take pictures and get them to the Dalai Lama." The same Western tourist said that security police later stopped his tour group and accused them of taking pictures of the protest around the statue, and demanded to check the group’s cameras.

The tour group did not have images of the protest or the destruction of the statue, but before and after images of the statue show that only the statue’s base now remains on the hillside (see: http://www.flickr.com/photos/gyalpo/sets/72157602378824050/). 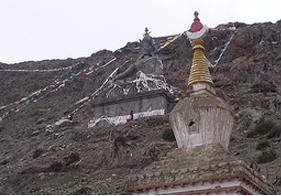 Guru Rinpoche (Padmasambhava) statue at Darchen before its destruction on September 28, 2007. Photo provided by tourists visiting the area at the time  >>

The destruction of this statue in Darchen, in Ngari (Chinese: Ali) prefecture of the TAR, follows the demolition of another statue of Guru Rinpoche in mid-May at Samye, Tibet’s oldest monastery. Guru Rinpoche, or ‘precious master’, who is revered by both Tibetan and Chinese Buddhists, is accredited with establishing Buddhism in Tibet in the eighth century. Worship of Padmasambhava is of particular historical and spiritual significance to Tibetans, who believe that worshipping him can remove obstacles to the practice of Tibetan Buddhism, as well as preservation of Tibet’s unique Buddhist culture.

After they saw the human shield of Tibetans forming around the statue, the group of tourists left the town for the day. One said: "The idea that such a thing [as destroying the statue] could happen seemed absurd." When they returned, at around 4 pm, the Tibetans had either left or been removed from the area and military or security personnel had taken up positions around the statue, which was over six feet high. One tourist estimated the number of security personnel in the area at that time as between 80 and 100.

A second tourist said: "The army was lined up from the Buddha [Guru Rinpoche statue]....across a stream and up the incline to two chortens which looked as though they were part of a monastery or other religious building." She added that three plain clothes officials who spoke good English had then approached the tourist group nearby and accused them of taking pictures of the protest.

At around 5 pm, the tourist group could see that the head and part of the shoulder of the Padmasambhava statue was missing. Later, the entire statue was demolished. One of the tourists said: "Tibetans were very distressed and the mood was tense."

The destruction of the Darchen statue followed an incident in mid-May 2007, when the authorities ordered the destruction of a 30-feet high gold and copper plated statue of Guru Rinpoche (Padmasambhava) donated by Chinese Buddhists to Samye monastery. There is an increased interest in Tibetan Buddhism throughout China, with many Chinese now following Tibetan Buddhist teachers and going on pilgrimage in Tibet.

The demolitions follow new regulatory measures passed in China in 2005 and in the TAR in January this year including new limitations on the construction of "large-size outdoor religious statues" (see ICT’s report: Demolition of giant Buddha statue at Tibetan monastery confirmed by China, at http://www.savetibet.org/news/newsitem.php?id=1144).

In a rare statement, the Democratic Management Committee of Samye monastery acknowledged the removal of the statue in May, saying that its construction "disobeyed the Law of the People’s Republic of China on Protection of Cultural Relics and the Notice of Illegally Building Open Statue of Buddha....Samye Monastery then self moved the open-air statue forwardly [sic]". (The full statement is at: http://info.tibet.cn/en/news/tin/t20070609_250524.htm).

For information on the new regulatory measures and religious repression in Tibet today, see ICT’s report: The Communist Party as Living Buddha: The crisis facing Tibetan religion under Chinese control (April 2007), available for downloading at: http://savetibet.org/documents/document.php?id=226.