HONG KONG, China -- Jet Li, a prominent follower of Tibetan Buddhism, says he has met with the Dalai Lama and respects his teachings but believes that Tibet and China are part of one country. 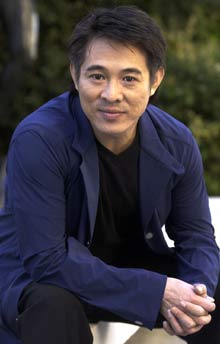 The 44-year-old action star also said at a taping of an interview for CNN's ``Talk Asia'' in Hong Kong late Wednesday that Taiwan and China should be unified.

``From the religious point of view, he's the master,'' Li said of the Dalai Lama, adding that when he met him in 2000 he told the spiritual leader that he backed having the 2008 Olympic Games in Beijing.

China was bidding for the Olympics at the time and there was some opposition to the bid.

``They (the Chinese) just want to show a wonderful party, the Olympics, to the world,'' he said.

``Lots of famous guys ... they are my (spiritual) teachers. But it doesn't mean I agree with their politics,'' Li said without specifically naming anyone.

He said he believes China, Tibet, as well as the self-ruled island Taiwan, should be ``unified together.''

China and Taiwan split amid civil war in 1949, but Beijing still views the self-ruled island as its territory and has threatened to retake it by force.

Chinese Communist troops occupied Tibet in 1951 and Beijing continues to rule the region with a heavy hand. Beijing enforces strict controls on religious institutions and routinely vilifies the 71-year-old Dalai Lama, who fled to India in 1959 amid an aborted uprising against Chinese rule.

China says it has ruled Tibet for centuries, although many Tibetans say their homeland was essentially an independent state for most of that time.

The Dalai Lama has called for China to give Tibet full autonomy. Li, a major star in his native China, said he hasn't run into trouble with the Chinese government for his meeting with the Dalai Lama.

Li says on his official Web site that Tibetan Buddhism, ``has inspired me and accelerated my understanding of life.''

On the Tibet question, he says on his Web site, ``national borders and ethnic questions are political, not religious questions'' and that ``issues concerning the Chinese government and Tibet are that of an administering country managing an internal situation.''

Activists who monitor the situation in Tibet didn't immediately respond to e-mails from The Associated Press seeking comment on Li's statements.

Asked in Wednesday's interview to name the keys of his success, Li named his parents, his fans - and the Chinese government for selecting him to perform in kung fu demonstrations abroad when he was young.

``I truly appreciate the country for teaching me martial arts and giving me the opportunity to represent China around the world. I learned everything to build up my career,'' he said.

Li was a national champion in kung fu in China and performed for U.S. President Richard Nixon at the White House's Rose Garden in 1974, according to Li's Web site.

He made his name in Hong Kong movies before moving on to Hollywood, where his credits include ``Lethal Weapon 4,'' ``Romeo Must Die'' and ``Cradle 2 the Grave.''