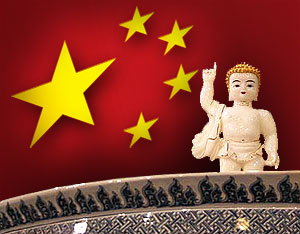 Yet despite the jailing of house-church leaders and members of the Falun Gong spiritual movement, religious belief and practice have seen a huge resurgence in the last 20 years, particularly the long-established creeds of Buddhism, Taoism and Confucianism.

"The government's attitude towards religion is changing with the times," said Fang Litian, director of the Buddhism Research Institute at People's University in Beijing.

Last month, the party approved state and party leader Hu Jintao's proposal to include religion in the party constitution to reflect its desire to promote the "positive influence of religion in economic and political aspects," Fang said.

Buddhism is leading the way, with an estimated 100 million believers among China's 1.3 billion people, according to the State Administration of Religious Affairs.

"In the past few years, Chinese Buddhism has developed smoothly and the number of people who believe in Buddhism is increasing," the administration said in a statement to dpa.

"More temples were built or renovated, and the Buddhist circles are performing more social activities under the orientation of 'humanistic Buddhism,'" it said.

Earlier this year, researchers estimated that some 320 million Chinese people, or 31 per cent of adults, had religious beliefs, about triple the decades-old official estimate previously used by the government.

After interviewing 4,500 people, Tong Shijun and Liu Zhongyu of Shanghai's East China Normal University found a "striking feature" in the resurgence of Buddhism, Taoism and other traditional Chinese belief systems.

They found that 62 per cent of respondents with religious beliefs were under 40.

"The traditional thought holds that more old people than young people are religious, but our survey showed that believers have become younger and younger," Tong told dpa.

"Old people are generally less educated, they want the Buddhism to bring them health and safety," Fang said.

"Young people may agree with the ideas and philosophy of Buddhism, and it may help them in life," he said.

For the first few decades after it proclaimed the People's Republic in 1949, the party tried to suppress all religion as feudal superstition.

The movement against religion culminated in the communist fundamentalism of the Cultural Revolution, when temples and monasteries were smashed by fanatical young Red Guards. Many Buddhist monks and nuns were forced to marry and work on communal farms.

But the greater religious freedom of the last 25 years has strict limits.

Major Buddhist temples place a strong emphasis on tourism and other non-religious activities, sometimes drawing criticism that they are too commercialised.

The government has promoted Buddhism and supported state-sanctioned temples in the last decade partly to counteract the influence of the Falun Gong and similar sects.

Before it was banned in 1999, Falun Gong claimed to have 70 million members in China, roughly the same number as the communist party.

"You can say that the (government) support of Buddhism since 1999 has had a positive influence," Fang said.

Some scholars see a parallel in the adaptation of Buddhism to communism in the last two decades and its earlier subservience to the Confucian ideology that dominated China before 1949.

There are even those who claim that Mao Zedong, the founder of the People's Republic, was influenced by Buddhist morality and superstition.

Many individuals have also bridged the gap between communism and Buddhism, seeing common ground between Buddhist morality and the party's need to "serve the people" and promote the "harmony" that is now a key concept of Hu Jintao's ideology.

"I don't think it is contradictory for an individual to believe in both religion and communism," Tong said.