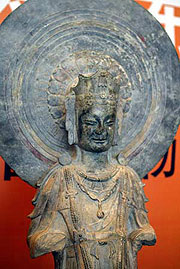 The stolen statue was purchased legally at the price of 2 million US dollars by Shinji Shumeikai later in 1995.

After eight-month negotiation with China's State Administration of Cultural Heritage, Shinji Shumeikai finally promised to return this statue to China in 2007, after the 10th anniversary of its Miho Museum, where the statue was displayed.