Lhasa, Tibet -- The Chinese-installed vice-governor of Tibet says the Buddhist monks who disrupted a tour of Lhasa by foreign journalists on Thursday won't be punished. 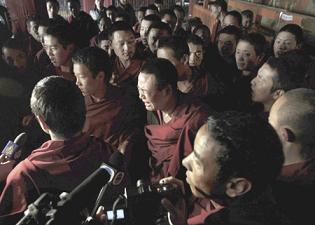 << A Tibetan Buddhist monk, center, cries during a visit by foreign journalists to the Jokhang Temple, one of Tibet's holiest shrines in Lhasa, the capital of China's Tibet Autonomous Region on Thursday, March 27, 2008. (AP / Andy Wong)

"We will never do anything to them. We will never detain anyone you met on the streets of Lhasa. I don't think any government would do such a thing," Baima Chilin told reporters.

The trip through Tibet's capital was originally arranged by the Chinese government in an attempt to show foreign media the calm in Lhasa despite recent violent riots, which occurred just months before the Beijing Summer Olympics.

Instead, a group of about 30 monks in red robes confronted the journalists during their tour of one of Tibet's holiest shrines, the Jokhang Temple, telling reporters they had no religious freedom.

Government officials shouted for the journalists to leave, trying to pull them away while the monks continued to speak for about 15 minutes.

"I think that we're seeing a whole new phenomenon, that certain Tibetans are going to now take the risk of coming out when Western media are present," Robert Barnett, a Tibet expert at Columbia University, told CTV's Canada AM on Thursday.

The monks told the journalists that their exiled spiritual leader, the Dalai Lama, was not behind a violent riot in Lhasa on March 14.

"They want us to crush the Dalai Lama and that is not right,'' one monk said.

"This had nothing to do with the Dalai Lama,'' said another, referring to the March 14 riots.

China is trying to move attention away from what may have caused the protest by blaming the Dalai Lama for orchestrating the violence, said Barnett.

"It's a rather thin policy because they're pointing to only one protest out of about 40 that have occurred in the last 20 or so days," he said.

"They're trying to direct our attention away from those other protests that didn't involve any violence against Chinese civilians."

Upon learning of the monks' outburst, the Dalai Lama said he was in touch with "friends" about arranging talks with China, saying authorities there "must accept reality."

"I think that's important," he told reporters in New Delhi. "Now in any case we are (in the) 21st century, pretending or lies cannot work."

The monks met up with the group of journalists after they had already toured a Tibet medical clinic that had been vandalized near the Jokhang Temple.

Officials also showed the journalists a clothing store where five girls had been trapped and burned to death.

China rarely allows foreign reporters into Tibet under normal circumstances so the tour is being viewed as a public relations attempt ahead of the Olympics.

Later Thursday, Foreign Ministry Spokesman Qin Gang told a news conference he had no specifics on the outburst by the monks.

"I would like to stress that, including the monks, the people of various ethnic groups in Tibet are resolutely safeguarding the national unity and oppose separatist activities,'' he said, warning Europe not to interfere with Tibet in advance of a two-day meeting of European Union foreign ministers.

"Ethnic unity? This was an ethnic conflict," he told the Associated Press.

"I believe there are criminals, especially violent criminals, in the European countries. ... I hope that Europe will not adopt a double standard in this regard," Qin said.

Chinese officials claim 22 people have died since riots began but Tibetan exiles claim at least 140 people have been killed.

The area around the Jokhang Temple was later sealed off by Chinese police in riot gear. While they would not say why they were there, they refused access to the area for anyone except those living in the narrow lanes surrounding the temple. Many of the nearby shops were also closed.

Chinese state television did not show the protest in its coverage of the reporters' visit.

"More than a dozen lamas stormed into a briefing by a temple administrator to cause chaos," the official Xinhua News Agency reported in print, adding, "The media tour soon resumed."

Meanwhile, just days after accusing the Dalai Lama of being a slave owner, China's ambassador to Canada called the Tibetan spiritual leader a serial liar on Wednesday.

"The Dalai Lama has been telling lies to the world for decades," Lu told journalists at a news conference at the Chinese Embassy in Ottawa.

The statements were the latest in a series of attacks Lu has made about the Dalai Lama, a figure renowned by respected international dignitaries for his adherence to peace and non-violence.

"Their modern PR strategies that they've been trying to develop in the last couple years, they've given up on those," said Barnett.

"They've gone back to old-style rhetoric here and it means they're under a lot of pressure."