Nanjing, China -- A thousand year old steel case discovered in an underground shrine reveals a treasure of Buddhist relics. The case was opened Wednesday, in Nanjing, in east China. 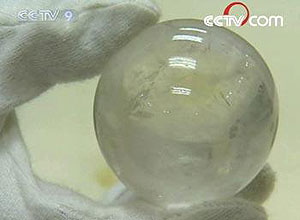 The box was discovered at the Dabaoen Temple.

As archaeologists at the Nanjing City Museum removed two steel panels of the base a pagoda top wrapped in silk emerged. Then the half-metre by half-metre by 1.34 metre case, showed promise of more relics deeper inside. Steps have been built and the surrounding area flooded with ultra violet rays to help preserve the cultural relics.

A partition in the inner chamber was removed, yielding more objects, immersed in water. There are two pearls, a copper coin with a phoenix design. There may be more.

Hua Guorong, vice curator of the Nanjing City Museum says preliminary analysis shows the object was a pagoda about a meter high.

He says Buddhist relics, formed from the ashes of Buddhist masters who were cremated, were an important aspect of the religion. Those relics are likely to lie beneath the pagoda.