"Religion should be a power for peace in Asia and the world, not a root of unrest. We should get rid of religious conflict for good. We should use different ideologies to heal the wounds caused by the globalization of civilization." -- Master Xuecheng

Manila, Philippines -- Buddhist Master Xuecheng, vice chairman and secretary-general of the Buddhist Association of China recently explained his concept of "peace" in Manila, Philippines while attending the Seventh General Assembly of Asian Conference on Religions and Peace on October 17-21. 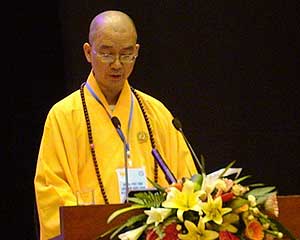 Master Xuecheng was browsing the news on the internet when meeting the China News Service reporter. Concerning himself with the changes in the world has become an important means of spiritual self-development. He sketched out the major challenges facing humanity today, from environmental crises through the division between rich and poor, power politics and the financial crisis, to terrorism, separatism and extremism.

"Facing the reality of human society now, it is heartbreaking," he said. "Violent phenomena are still prevalent, as are racial killings, religious conflicts, cultural discrimination, antagonism between groups, ethnic strife, national disintegration, and ideological conflict, all of which are betrayals of religious wisdom and a departure from the teachings of the great religions."

Master Xuecheng said that peace is an eternal pursuit of mankind, but it demanded an effort from every human individual. The world's major religions should promote the common interest of humanity to avoid narrow-mindedness and prejudice, to promote mutual understanding and communication, to tolerate and appreciate all religions, and to set a model for a harmonious and peaceful world for all human groups and individuals.

"There are five major religions--Buddhism, Taoism, Islam, Catholicism and Christianity, and we set "peace" as the theme and goal for all. China's five major religions live in harmony and there have never been wars and conflicts caused by religion, something that is not the case in other countries."

Xuecheng said that China always advocates the concept of peace in traditional culture and religion. It is particularly important in a globalized context. "During the Cold War, there was antipathy between east and west, and the west was an advocate of the conflict of civilizations. In a new context of globalization, China can explore the spirit of peace and heal the wound caused by this conflict."

In order to achieve this goal, Xuecheng attends several religious conferences and forums every year, disseminating the spirit of peace at every opportunity.

"These exchanges can allow all believers and religious leaders from all religions to reach a greater consensus in dealing with the issues of a new era and humanity's common problems, so as to reduce disputes through understanding our differences," Xuecheng said.