BEIJING, China -- China's birth place of kung fu, the Shaolin Temple, has taken over the management of four Buddhist temples in southwest China in a move criticized by some Internet users for mixing capitalism with religion. 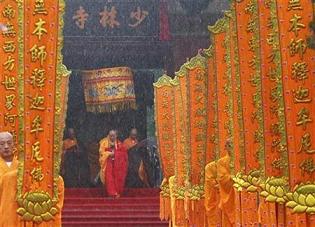 << Buddhist abbot Shi Yongxin walks out of the Shaolin Temple during a ceremony in Dengfeng city, in central China's Henan province, July 5, 2007