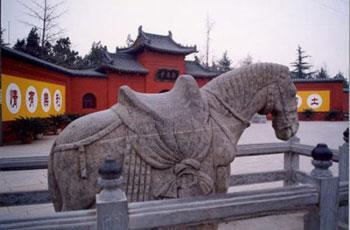 << China's first Buddhist temple, the Baima Temple, or White Horse Temple, is located in the city of Luoyang in central China's Henan province.

It has now been expanded with the construction of an Indian-style stupa and was recently opened to tourists. Here is Ma Shuo again.

The stupa, a Buddhist structure, was jointly initiated by the governments of China and India in 2005 during Chinese Premier Wen Jiabao's state visit to India.

Now, after two and a half years of construction, the new stupa has been completed. It is located on the west side of the temple and faces east. The two-storey building occupies an area of six thousand square meters.

All the stone materials were transported from India. The decorative art around the pavilion was completed by Indian craftsmen and then shipped to the White Horse Temple.

Monk, White Horse Temple, said, "Thanks to the efforts of the Chinese and Indian governments, the new Indian-style stupa at the White Horse Temple has finally been completed. It symbolizes the friendship between the two peoples."

The White Horse Temple was established under the patronage of Emperor Ming in the Eastern Han capital Luoyang in the year 68.

The first version of the Chinese "Sutra of Forty-two Sections" was produced at the temple. The temple then increased in importance as Buddhism grew in China, and spread to Korea, Japan and Vietnam.

The introduction of Buddhism in China was also a significant influence on Chinese morals, thought and ethics.