In China, A Different Brand of Buddhism

Ethnic Han Turning To Tibetan Doctrine For GuidanceHUANGSONGYU RESERVOIR, China -- The Buddhists came by the busload to this partially frozen reservoir about 55 miles north of Beijing. 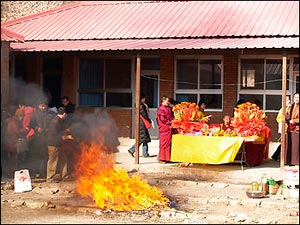 << Han Chinese who practice Tibetan Buddhism circle a bonfire north of Beijing as part of a "fire sacrifice" ceremony. (By Maureen Fan -- The Washington Post)

In the morning, they released 53,000 fish into holes cut in the ice. In the afternoon, they walked clockwise around a bonfire in the courtyard of a windswept rural hotel, chanting incantations against evil as volunteers threw cooking oil, beans, fruit and cigarettes onto the flames.

The participants were 200 Han Chinese, the ethnic designation of most people on the mainland, but their teachers, or "masters," were Tibetan monks, including Yixi, a lama, or senior monk, from Shigatse, Tibet, who presided over the unusual and unofficial ceremony last week from between two enormous vases of tulips.

"The lama who hosted this has great achievements in Buddhism, so the power and merit of releasing fish with him is much greater than if ordinary people release fish," said Zheng Jinbao, a 36-year-old vegetable dealer who, like the others, had heard about the out-of-the-way animal-rescue ceremony by word of mouth. "Several years ago, only 10 people at a time attended fish releases, but now, more than 100 people come each time."

While statistics are hard to come by, monks, followers and experts say that growing numbers of middle-class Chinese are turning to Tibetan Buddhism, driven by the perception of a spiritual vacuum in society and aided by the voluminous information available on the Internet. Communist Party officials and celebrities alike have embraced Tibetan Buddhism, despite having to worship at home, meet their lamas at night and run the risk of attending officially unauthorized events, such as the fish release and "fire sacrifice" at Huangsongyu Reservoir.

Their spiritual leader is the Dalai Lama, whom Beijing blames for stoking the deadly riots in Lhasa last March. Although he won the Nobel Peace Prize in 1989, the Dalai Lama is routinely described in official state media reports as a wolf in monk's clothing, an evil and dangerous separatist. In December, China stunned European leaders by canceling a summit on the economic crisis because the E.U. president had planned to meet the Dalai Lama the same week.

For now, most Chinese who practice Tibetan Buddhism are able to worship under the radar because their numbers remain comparatively small and their movement is not organized. Followers meet in private homes to recite sutras and compare knowledge or gather in apartments where wealthy benefactors have set up elaborate shrines. Many appear to be unaware of regulations intended to restrict their worship.

But lamas who travel to more prosperous eastern cities to teach and raise funds for monasteries back home sometimes find themselves trailed by security officials or turned away from hotels. Followers who have tried to organize fish releases are sometimes stopped by police. Others have been fined nearly $1,500 for holding illegal ceremonies in their homes. And some monks say they have to meet some of their students at night because they are Communist Party officials.

"Out of protection for my followers, I said they were only some new friends," recalled Dorje, a lama from Sichuan province who said he was chatting with followers in a hotel room in Wuxi, in coastal Jiangsu province, last year when officials from the local religious affairs bureau barged in and announced that it was not permitted to promote Tibetan Buddhism among Han Chinese. "I knew this was ridiculous, so I asked which central government regulation said so," Dorje said. "They could not answer, and they eventually left."

On a visit to some of his 600 followers in Shanghai last month, Dorje, who asked that his monastery's name and his Chinese name not be published, said he was turned away from four hotels until he finally changed out of his monk's robes. He has 10,000 followers in various cities, 6,000 of whom are women, he said. Most are concentrated in Beijing, Wuxi and Shandong province and have helped him raise $88,000 in the past three years toward the cost of a new sutra hall, he said.

While there are close ties historically between Tibetan Buddhism and different types of Chinese Buddhism, they are practiced differently. Tibetan Buddhism encourages lamas to counsel students individually, while the teaching in Chinese monasteries is usually reserved for monks, studying in groups.

Like other religions, Buddhism suffered during the persecution of the 1966-1976 Cultural Revolution. When it limped back, it took a simpler form that had been influenced by China's gradual opening to the West. Meanwhile, a purer and more complex form of Buddhism continued to be practiced in the isolated region of Tibet, which the Chinese army had invaded in 1950 and annexed in 1951. The Communists allowed a degree of autonomy until a Tibetan uprising in 1959. After the Dalai Lama fled to India that year, China formed the Tibet Autonomous Region, which it has governed since. Some Chinese Buddhist temples now invite senior Tibetan monks to visit in a bid to attract more followers.

"It's definitely on the increase," said Kalden Lodoe, a broadcaster with Radio Free Asia in Washington, an expert on Tibetan Buddhism and a former monk in India for more than 10 years.

Geng Xiaozhen, 29, a Beijing resident who recently quit her job as an editor for a government-controlled Web site specializing in news from Tibet, said she learned about Tibetan Buddhism through her job, then found a senior monk from Qinghai province to teach her until he died last October. Since then, she has studied Tibetan Buddhism on the Internet.

"A friend of a friend went to India twice and met the Dalai Lama," she said. "Then the police called him. So, before attending anything, I always ask if it's safe or not. But we have the right to our religious beliefs, and I'm not doing anything illegal."

In Shanghai, one of Dorje's followers is a retired president of a construction company who has turned an upright piano next to her kitchen into a Tibetan Buddhist shrine.

"Are there regulations preventing people from gathering to pray and preach at home? I've never heard of that," said Chen Yan, who studied Chinese Buddhism for years without much satisfaction before meeting another Tibetan lama she believes helped cure her of brain cancer. "I'm just reciting sutras at home. What's wrong with that?"

Chen's brother, a Communist Party member and retired official with a state-owned company, kept an eye on Dorje after his sister introduced them and found him trustworthy.

"He never uses the funds for his own purposes," Chen Xianyao said. "All he cares about is the construction of his sutra hall. He treats his followers equally no matter how much they contribute. Therefore, we support him."

In interviews, followers and lamas, including the Chens and Dorje, denied that they discuss politics.

But the Dalai Lama, who said last year that his faith in the Chinese government is "thinning," has called on Tibetans to make "concerted efforts" to reach out to the Chinese, seeing it as a way to address problems in Tibet and help preserve its rich cultural heritage. There are indications that such efforts may be having an effect among Han Chinese.

"Many followers ask themselves how a person who studies and promotes Buddhism can instigate a riot," said Geng, the former Web site editor, referring to the protests last March. "I believe he is erudite and wise, and I will be lucky if I can see him in my lifetime. I don't believe he would ever drum up violence. He can't control people's minds."

Lu Xin, 67, a retired Chinese teacher who began to study Tibetan Buddhism in 1999, said she had recently visited monks in Aba prefecture, in Sichuan province, for a week. "Unlike people in Han Chinese areas, people there are very pure, kind and plain. As soon as I arrived, I felt I was in another world," Lu said. "Tibet is the only pure land left in the world, and I worry about its culture. For example, if we over-develop Qinghai Lake tourism, will the garbage and plastic pollute the environment? Will plain people be seduced by money? If I didn't study Tibetan Buddhism, I would know little about Tibet."