Beijing, China -- For centuries, only a few hardy tourists have joined the hundreds of Buddhist, Hindu, Jain and Tibetan Bon pilgrims who make an annual trek to Asia's holiest peak, Mount Kailash. 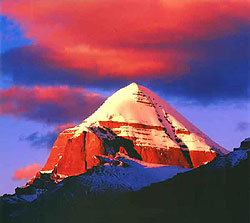 Many Tibetan nomads still walk across the high plains and mountains that isolate Kailash from the rest of the world, often carrying tents, bedding and cooking pots on packhorses.

The Tibetans' traditional pilgrimages to the 6,675-metre holy mountain can take weeks or even months, especially if they perform prostrations along the whole route, but most now reduce the journey to a few days by hiring trucks or jeeps.

Tourists usually reach the area from India or Nepal by crossing China's nearby Himalayan borders or from Lhasa, the capital of China's Tibet Autonomous Region.

That could change dramatically next year when planeloads of tourists are scheduled to begin arriving at a newly expanded airport in Tibet's Ali, also known as Nagri, which administers Kailash.

The airport expansion is a key part of a government plan for development of tourism infrastructure to create a new Sacred Mountain Holy Lake Scenic Area around Kailash and the nearby Lake Manasarovar, said Li Yujian, head of the Ali tourism bureau.

"Ali airport has finished construction and will be put into trial use this year and full use next year," Li said by telephone.

"My expectation is that at the beginning, there will be one flight to Lhasa every few days," he said. "We will gradually adjust the flights later, according to the rise in the number of tourists."

Tibet Tourism plans to invest up to 600 million yuan (88 million dollars) over the next few years to "make the Sacred Mountain Holy Lake Scenic Area into a national-level, and even a world-level, fine-quality tourist area," a Tibet regional government website reported.

It plans to upgrade the main road from Lhasa and build hotels and restaurants near Kailash, where the small village of Darchen serves as the transit point and campsite for Tibetan pilgrims.

The price of a tourist ticket for the Kailash area, to which Tibetans are admitted free, has already risen to 200 yuan, Li said.

"We expect several thousand tourists this year," he said.

"Last year, the situation was really bad," Li said, apparently referring to the ruling Chinese Communist Party's suspension of tourism in Tibet for much of the year after widespread unrest and anti-Chinese protests.

"There will be a sharp rise in the future," he said of the tourism development plan. "I am confident of that."

China has already developed several Tibetan areas into major tourist destinations, such as Lhasa and the official Shangri-la tourist town in Yunnan province.

The Communist Party said it has improved the economies of some of the country's poorest and remotest areas by attracting tourists from China's affluent cities.

Yet supporters of Tibetan exiles argued that the development largely benefits China's Han ethnic majority and rides roughshod over Tibetan culture and religion.

"Tibetans welcome appropriate and responsible development that respects their cultural and religious traditions but not the fast-track commercialization that Beijing is prioritizing in so many areas of Tibet including now in the sacred Mount Kailash region," said Kate Saunders, communications director of the Washington-based International Campaign for Tibet.

Saunders said evidence from local businesses in other Tibetan areas suggested that most tourism revenues leave the region.

"Claims that it will help develop the area are, essentially, bogus," Matt Whitticase of the London-based Free Tibet Campaign said of the tourism development in Tibetan areas.

"The model is effectively based on rapidly developing infrastructure ... with little or no regard to how that model of tourism is impacting on the environment," Whitticase said.

As well as upgrading access to Kailash, local authorities have improved the pilgrims' path, or kora, around the snow-capped peak in recent years.

Trucks and jeeps can now drive along about half the 57-kilometre kora, raising speculation that a circular vehicle route could be completed by building a road over the steep 5,636-metre pass of Dolma-la, where Tibetan pilgrims believe they are reborn.

An official from Tibet Tourism declined to discuss its plans for Kailash, saying only that the project was "in preparation" and a senior official had discussed it with the national government in Beijing in early April.

But Li said the development would "protect normal religious activity" and the environment around Kailash. It was "impossible" to complete a road around Kailash, he said.

"It is a sacred place, and a road would kill its sacred meaning," Li said.