Of monks and men

Bruce Holmes has a religious experience in a Buddhist heartland

Luoyang, China -- The fragrance of incense fills the air as locals carry large burning sticks to their prayer positions. We are at the White Horse Temple near Luoyang in China the country's first Buddhist temple, built in 68AD and named by the emperor after the white horse that brought the first Buddhist scriptures from India. 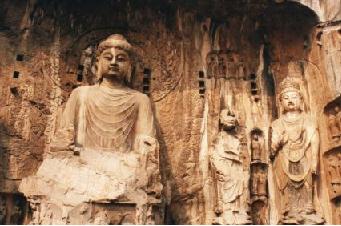 It's the first day of the month on the Chinese lunar calendar and we're fortunate to be here on this day, for on the first and 15th of each month a special service is held.

Monks in traditional yellow robes approach along the path, chanting softly, before forming two lines outside the main temple. Their leader conducts prayers in front of an altar inside the doorway while a large statue of Buddha looks down upon him. There is serenity here.

When the ceremony is over, we inspect the various halls and temples. In the Hall of Heavenly Kings, the laughing Buddha Maitreya is surrounded by clay sculptures of the four guardian gods of the Buddhist faith, each watching over one direction of the compass. The sculpted gods and the wooden shrine with its colourful dragons reflect the culture of the Qing Dynasty (1644-1911).

The Hall of Mahavira is notable for its 18 statues made from cloth during the Yuan Dynasty (1271-1368). Weighing only a few kilograms and being hollow, they are referred to as the body-less.

Leaving the temple complex we pass the Bell Tower, which welcomes the faithful in the morning, and the Drum Tower, which signals the closure of the temple in the evening.

The city of Luoyang is in Henan Province in central China and is considered part of the cradle of Chinese civilisation, having served as the capital for 13 different kingdoms over 4000 years, including the first dynasty, the Xia, dating from the 21st century BC.

Another tourist drawcard on the city's southern outskirts is the Longmen Grottoes. The UNESCO World Heritage listing says the "grottoes and niches of Longmen contain the largest and most impressive collection of Chinese art of the late Northern Wei and Tang dynasties (316-907)." But that does nothing to prepare a visitor for the scale of what is here.

Beside the Yi River, spanning one kilometre, are 2345 caves holding 100,000 carved statues or reliefs of the Buddha in various poses. They range in size from two centimetres to 17 metres. Many are in cave temples, a feature begun in ancient India in the third century BC before spreading to China.

Some destruction of Buddhist sites occurred during earlier dynasties but much of the theft, including the beheading of many figures at Longmen, took place during the 20th century when such heads found their way to western museums and antique collectors.

Despite that, there is still much to see here. In the Middle Binyang Cave we appreciate the finely carved image of the Buddha, attended by disciples and bodhisattvas, while Wanfo Cave features 15,000 small Buddhas chiselled into two walls.

But if size makes for the most spectacular, then that is surely the Fengxian Temple, an open-air space dominated by the 17.14-metre-high figure of Vairocana Buddha sculpted from the cliff face, sitting cross-legged on a lotus throne. He is accompanied by sculptures of disciples, bodhisattvas, guards and the King of Heaven in this Tang Dynasty temple completed in 676AD.

Soon it's time to move on to our next destination near Dengfeng, midway between Luoyang and the province's capital Zhengzhou.

Here at the foot of Shaoshi Mountain is the Shaolin Temple, famous for its kung fu monks and their martial arts training. Built originally in 496AD, the temple was burned several times over the centuries by warlords and most recently was damaged by Japanese invaders in the 1930s and in the 1960s during China's Cultural Revolution by the Red Guards. But with a more open government policy and the rising popularity of kung fu the temple complex has been rebuilt.

We inspect the halls of worship and stop to admire the sculpture of a turtle, said to be the ninth child of the dragon. Stroking its head is supposed to ward off all worries, rubbing the teeth brings wealth, the neck and back health. I try them all and keep my fingers crossed.

One of the most impressive parts of the site is the Forest of the Pagodas. These 246 stone tower structures were used to inter the dead monks. The majority of them are from the Ming Dynasty but we inspect an 800-year-old Yuan Dynasty one, which has Taoist as well as Buddhist symbols, and the oldest one from 796AD in the Tang period. The latter is much broader, reflecting the Tang perception that big is beautiful.

Tonight we eat a humble vegetarian meal in the temple's dining room. Then it's time for the show. We are issued with large, green army coats to ward off the cold, for this is an open-air theatre space in the valley of Song Mountain. Everything goes dark for a moment and then the Zen Music Shaolin Grand Ceremony begins.

The colourful lighting illuminates no mere stage but a brook complete with real bridge, the trees of the forest and, in the background, the Shaolin Temple itself. As the show progresses even the mountain ridges feature moving lights. Zen music blends with the sound of running water and the chants of monks echo from the mountain side.

The story features a maiden shepherding real goats along a path at one moment and an army of kung fu warrior monks the next. In all, 600 performers make up this spectacle.

To sit here, in the valley that is the original home of Zen and Shaolin Kung Fu, where the music of this moment echoes more than 1000 years of Chinese culture, is awe-inspiring.

The writer was a guest of Helen Wong's Tours.

China Eastern Airlines flies from Sydney to Shanghai and Beijing, with connections to Zhengzhou in Henan.

A five-day Luoyang/Shaolin Temple/Zhengzhou tour starts from $1850 a person, twin share (land only).

An 18-day Ancient Panorama tour starts from $4120 a person, twin share, plus taxes.