Qinghai, China -- Over the weekend, survivors of China's powerful April 14 earthquake cremated many of the more than 1,700 people killed. Hundreds of others remain missing. 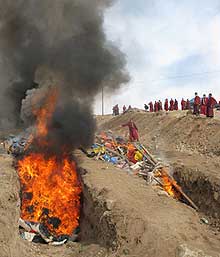 Vultures circled over the bodies of the dead, wrapped in blankets and placed in two trenches on a hillside overlooking the devastated town of Jiegu in western China's remote Qinghai province, high on the Tibetan plateau.

Sometimes, the dead are dismembered and fed to vultures in a traditional Tibetan "sky burial." But Tibetan Buddhist lamas, or monks, in charge of the ceremony in Jiegu estimate that there are between 1,000 and 2,000 bodies, so instead they were cremated.

The lamas sit facing the flames, dressed in crimson robes and chanting sutras. Jiegu's population is more than 90 percent Tibetan. So while the government has taken charge of the rescue efforts, they defer to the cultural and spiritual authority of the lamas for the funeral matters.

Living Buddha Danba, a high-ranking cleric at the Jiegu Monastery who is in charge of the funeral service, says this fiery offering to the Buddha is something the monks must do, and the government knows it.

"The government must allow people to follow their religions, especially following this huge quake," he says. "The government has trusted and permitted us to handle and cremate the dead as it is in line with religious freedom and religious rules."

In Tibet, Buddhist temples are centers of learning and science; monks are the backbone of the region's civil society. But China's government is sometimes uncomfortable and mistrustful of religious and civil groups.

Tibetan Buddhist monks join local residents in looking for survivors underneath the rubble of a collapsed guesthouse in Jiegu.

Tibetan Buddhist monks join local residents in looking for survivors underneath the rubble of a collapsed guesthouse in Jiegu.

Xia Xueping, a spokesman at the government's rescue command post, says both government and society have a role to play.

"The reason our rescue efforts have made such progress and been so effective is that the government has played the leading role," he says. "But citizens groups have also made a big contribution."

Teams of monks with shovels and crowbars have joined soldiers and rescue teams digging through the rubble for survivors.

But near the funeral pyre, Gelai Danzeng, a Buddhist monk, says that sometimes police have prevented the monks from rescuing the living or taking away the dead.

"The police may suspect that we took away the bodies ourselves, without the consent of their families," he says.

Wang Lixiong is author of the book Sky Burial, one of the more critical looks at China's Tibet policies by a Chinese author. He says that the earthquake gives both officials and monks a chance to show goodwill to the local population.

"I believe that some officials see this as a competition between the government and religion for the people's hearts and minds," he says. "So while we hear a lot from society about the monks' great contributions, we read very little about it in the official media."

Wang argues that official rescue efforts are often concentrated where the media can best see them. State media reports inevitably focus on grateful locals thanking the government for rescuing them.

It's the places where the media aren't looking that the rescue operations are sometimes weaker, and the monks by default become the main rescue force.