A counterfeit religious leader makes a cautious foray into Tibet

Lhasa, Tibet (China) -- The Chinese, having perfected the art of copying watches and DVDs, believe they have made a perfect copy of the Panchen Lama, Tibet's second-most revered religious figure, and set him loose on the streets of a prefecture in Southern Tibet. 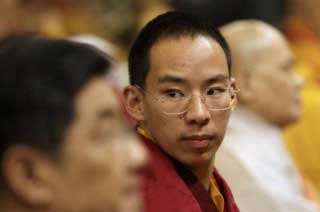 << Gyaltsen Norbu, anointed by China as the Panchen Lama in 1995

The state-owned Xinhua news service reported Tuesday that thousands of Tibetan Buddhists had gathered in Lhoka prefecture on China's border with India to see Gyaltsen Norbu, Beijing's copy of the Panchen Lama, who was appointed by the Chinese as a six-year-old boy in 1995.

The method of picking the successor to Tibet's high priests normally is a complicated one – unless you are a Chinese Communist, which makes it possible to ignore obscure religious practices that stretch back hundreds of years. Tibetan Buddhists believe the top lamas are reincarnations of an unbroken line of religious figures stretching back to the Buddha himself, whose soul never disappears. The Chinese Communists appear to believe it just takes a religious bureaucrat to run the place.

Normally, when top religious figures such as the Dalai Lama, the Panchen Lama or the Karmapa Lama die, a search party of lamas in disguise scours the region for special signs. This includes children who have special knowledge without being taught or who can recognize the late lama's possessions. Mothers' dreams are scrutinized for signs that the child may have special powers. After a tortuous process involving several candidates, the names of the final candidates are written on ivory lots and deposited in a golden urn which is then made the subject of a religious ritual in the Jokhang Temple in Lhasa, one of the country's holiest sites.

In 1995, the exiled Dalai Lama announced that this process had produced Gendu Choekyi Nyima, the five-year-old son of a Tibetan herder in a county north of Lhasa, to be the 11th reincarnation of the Panchen Lama. That lasted long enough for the Chinese police to swoop down on the village and grab the child and his parents.

Gendu had never been seen or heard of since until last year when Tibet's new governor, Padma Choling, was quoted by the Times of London as saying the young man, now 20, is still living in Tibet, where "his brothers and sisters are at university or are doing regular work," presumably much as the famed last Emperor Pu Yi ended up working as a gardener in the Beijing Botanical Gardens.

The official "gave no hint as to the family's whereabouts but repeated the Communist Party's mantra: "'As far as I know, his family and he are now living a very good life in Tibet. He and his family are reluctant to be disturbed. They want to live an ordinary life.'"
As with the best fake Gucchi bag, China's version of the Panchen Lama seems to be quite good quality. An Agence-France Presse report recently quoted the Dalai Lama during his first Twitter message as saying "As far as I understand, he (the new Panchen Lama) is very intelligent.  As far as Buddhist scripture,he is making a lot of effort. But the people have certain suspicions about him, on whether or not his interpretations of Buddhist scriptures will be effective. This is very important and it will depend on he himself."
Nonetheless, the selection of Gyaltsen Norbu as the Panchen Lama, and then as vice president of the Buddhist Association of China earlier this year, provoked a sharp reaction from the Dharamsala-based Tibetan government-in-exile, which called it "another attempt" by China to undermine the popularity of the exiled leader the Dalai Lama

Presumably, the Chinese authorities are keeping a close eye on the dethroned child, wherever he may be, after their experience with Ogyen Trinley Dorjee, who was named the Karmapa Lama, the spiritual leader of the Black Hat sect, by the Chinese at the age of 7 as Tibet's first living Buddha. The Black Hat sect is one of four major schools of Tibetan Buddhism, behind only the Dalai Lama and Panchen Lama in the Tibetan spiritual hierarchy.

As Asia Sentinel reported on May 10, unfortunately for the Chinese, in December 1999 the Karmapa, then 14, pretended to go into seclusion but instead slipped out a window of the Tsurpu Monastery with a handful of attendants and escaped across some of the most forbidding terrain on the planet by foot, horseback, train and helicopter, making world headlines and embarrassing the Chinese. He ended up in Dharamsala with the Dalai Lama, a living repudiation of the Chinese attempt to co-opt him. He remains in Dharamsala, also the subject of a battle with another youth as to who is the real Karmapa. Some suspicious individuals believe that, despite the endorsement of the Dalai Lama, Dorjee was sent by China as a spy although there has been no evidence of that.

The Chinese are taking no chances with either the real Panchen Lama or their copy. According to the Associated Press story, Gyaltsen, the counterfeit Panchen Lama, who is based in Beijing, "is visiting major religious sites in Tibet, state media reported Tuesday, part of efforts to expand his influence in the restive Tibetan region." It was his first trip to Lhoka since he was appointed the Tibetan religion's second-most revered figure. Gyaltsen was reported as having visited Lhasa and monasteries in and around the city over the weekend. On Sunday, he made his first official visit to the 900-year-old Reting Monastery a few hours north of Lhasa, Xinhua said. On Monday, he held prayer services in Lhoka, known in Chinese as Shannan, and blessed thousands of devotees, according to the report.

"I am very happy because it has been my dream to come to Shannan and hold a prayer service here," the Panchen Lama was quoted as telling local government officials. Most temples in Tibet display only photographs of his predecessor, who died of a heart attack at his monastery in Xigaze in 1989. Although most of the monks in Tibetan monasteries now are approved by the state, visitors can usually get a huge rise out of them by surreptitiously showing them photos of the Dalai Lama.