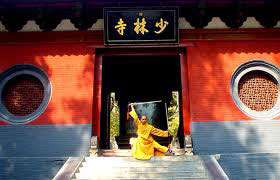 Nestled in Mount Songshan of Central China's Henan province, the monument of Zen Buddhism was added to the World Heritage List during a meeting of UNESCO's World Heritage Committee in Brasilia, Brazil Sunday, China Daily reported.

The new addition became China's 39th site in the list which include 28 cultural sites and seven natural tourist spots in the country.

UNESCO said the historical architecture complex stands out for its great aesthetic beauty and its profound cultural connotations.

The complex is composed of 11 traditional structures, including the Shaolin temple, the Observatory, Songyang Academy, Taishi Towers and Zhongyue Temple.

With a history of more than 2,000 years, these monuments feature various architectural styles brimming with ancient Chinese culture.

They provide the world with a glimpse into ancient Chinese religion, philosophy, customs and scientific development, said Yang Huancheng, an expert of ancient architecture.

"For the monks, living in a world-recognised heritage site is a wonderful experience, but at the same time, our responsibility to protect the temple becomes even graver," he said.