China: In search of an identity

In new China's cities, millions of young people are turning to Buddhism to make sense of their county's rapid transformation while in the far west, minority communities are searching for ways to preserve their culture against the pressures of development.

Shanghai, China -- Every summer, young Chinese from the country's far corners gather at the foothills of the Taibai Mountains in China's east. The gathering includes doctors, lawyers, college graduates and, last summer, even a couple of nuclear scientists; in short, the kind of white-collar crowd one might usually find at a Starbucks coffee-shop in downtown Shanghai. 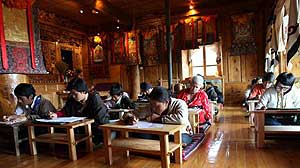 But these young Chinese weren't at Taibai on holiday; they were there in search of answers. The cool Taibai Mountains are home to the Tiantong monastery, a few hours' drive from the eastern port city of Ningbo. Tiantong Si is a 1,700-year-old centre of Buddhist learning, and it has influenced the thought and culture of much of China's east.

Last summer, Jiang Julang, a graduate from Beijing's elite Peking University who is in his mid-twenties, was an unlikely addition to the summer crowd. Jiang was born in the eastern city of Hangzhou, now a sprawling industrial centre and emerging IT hub, and once another thriving centre of Buddhism in eastern China. Like most Chinese of his generation, Jiang had a public school education; going to the government-run kindergarten around the corner from his home, to the primary school down the road and, finally, to the country's most prestigious institution in this capital. Like most of his generation, he was brought up on a strict diet of Marxism and science. His parents, grandparents and great-grandparents, who all used to frequent Tiantong Si, were Buddhists.

For Jiang, however, their beliefs were “backward superstition.” Or, so he used to think. “In China, we are brought up to not believe in faith,” he tells me one evening, when we meet at the lush, sprawling campus of Peking University in Beijing's northern Wudaokou university district, a bubble of calm and quiet in the chaos and dust of Beijing. “As a person, we all want to know where we came from, and where we are going. You can be taught perfect logic. But, at some point, you will have questions that logic cannot answer.”

Those questions brought him to Tiantong. As Jiang headed east to Tiantong last summer, lessons were also underway in Gyalthang, a small mountain town in China's far south-western Yunnan province, which borders Tibet. Young Tibetan monks, sitting cross-legged in front of small, wooden desks, pored over textbooks, written in the elegant and intricate Tibetan script. most of them came from nearby villages. They had had little opportunity to learn to read or write their traditional script, let alone learn of their faith.  But in this small two-story house in Gyalthang's old city, under the watchful eyes of Lobsang Khedup, a monk from Qinghai province, they were given a chance to study the scriptures.

Tiantong and Gyalthang, at first glance, have little binding them in common, separated across the breadth of China's vast, diverse landscape and shaped by different histories and schools of thought. Given the uniqueness of Buddhist thought and practice, and the incredible diversity of its many communities in China, from its south to Tibet, it makes little sense to talk of Buddhism in China as a monolith. There are an estimated 100 million followers of Buddhist faith in officially atheist China (some estimates say there are more than 300 million, but in the absence of any surveys or a census, as well as the ambiguity of its practice, no one really knows for sure). Yet, taking a step back, both places are contested sites of a similar struggle unfolding in today's China; a struggle between older cultural values and the unprecedented change the country has seen in the past six decades.

There is a strange irony to this complicated battle. As young, urban Chinese like Jiang look to the past for answers; in the villages and communities around predominantly Tibetan Gyalthang, older ways of life are being eroded by modernity.

Monasteries like Tiantong are thriving in the east, but community schools are struggling in the west, which lags behind the rest of the country on most economic and social indicators. In Gyalthang, Dakpa Kelden has been trying to make sense of these changes. In 1959, the year the Dalai Lama went into exile in India, Dakpa's family — who have lived in Gyalthang for generations— left for India. He was born in an exiled Tibetan community in Madhya Pradesh. He studied in monasteries in Karnataka and Dharamshala to become a monk. After China's opening up in 1978, Dakpa's family decided to return to Gyalthang, primarily to reunite with long-lost relatives. After his return to Gyalthang, Dakpa decided to open a school for young Tibetans. The school is hard to find, nestled in the maze of the town's narrow cobbled streets, hidden away between the rows of handicraft shops. “The main focus is for young Tibetans to learn about their heritage, to learn about traditional knowledge that they will not learn elsewhere,” he says. “This is important for their identity, and also for the community. Growing up in an exiled community, you are always taught that preserving your identity, your culture, is the most important thing, no matter what you do.”

In Yunnan, he found a local government surprisingly relaxed in its approach to religious policies. Dakpa worked with the government to find ways to promote culture through tourism. After the tourism boom hit the town in the late 1990s, fuelled by the new affluence in China's cities coupled with a rising interest in Buddhist thought and practice, he opened his own school. (The town itself, known as Zhongdian in Chinese, was renamed “Shangri-La” by the government in a bid to promote tourism.)

Gyalthang sits at the foot of the Foping Mountains, and under the shadow of the towering, grand copper roofs of the 300-year-old Ganden Sumsteling monastery, also known as Songzanlin. Built in 1679, it has been one of the most important centres of Tibetan Buddhism outside Tibet. In 1959, the monastery was damaged by the People's Liberation Army as it moved in to take control of Tibet and surrounding regions. The upheaval during the Cultural Revolution (1966-76), when older values and traditions were under assault, left the old monastery in ruins. Monks left for India, and few would return. Since the 1980s, the government has rebuilt many monasteries. Now, Songzanlin is home to several hundred monks.  “The policy is more relaxed here than in Tibet, where there are many restrictions, and there is less interference,” one monk tells me.

Visitors to Songzanlin are usually surprised to find a giant portrait of the Dalai Lama adorning the main hall, and the curious sight of Han Chinese, China's majority ethnic group, lighting incense sticks and kneeling down in front of the Tibetan religious leader.

Vilified by the Communist Party as a “splittist”, his image is banned in many of Tibet's monasteries. Dakpa says the slow revival in Yunnan could serve as a model for the rest of China.

The problems created by China's development model in Tibet were laid bare in March 2008, when there was widespread unrest and rioting in many Tibetan-inhabited areas in China. There is little to suggest the government is reconsidering its development model, either to make it more inclusive or to be more conscious of the needs of local communities who feel their ways of life are being eroded. What is interesting about Dakpa's project is that it finds a balance, using cultural tourism to tap the power of the market. His initiative relies on the tourism boom. Foreign visitors can stay at the school, for a fee, and study Tangka, the Tibetan art form of painting on cloth. This pays for maintaining the school.

Another similar initiative is Laurence Brahm's Shambhala House, which is a social enterprise in Tibet that looks to empower communities through microfinance, ecotourism and heritage restoration projects, and by finding a market for traditional skills. (I couldn't visit Brahm's project in Tibet, as journalists in China are not allowed to travel to Tibet unless on a government-guided tour.) I met Brahm during a recent visit of his to Beijing, the day after he held a successful fund-raising effort and a photography exhibition showcasing his travels through Tibet in Beijing's expansive 798 art district.

Brahm's journey to Tibet is an unlikely one. In the 1990s, he worked as an economic adviser to the Chinese government under Premier Zhu Rongji, who championed the reforms. Now, he is a critic of China's GDP-focused development model. “I don't think high growth rates are only way to ensure social stability,” he tells me. “Spirituality and changing values to appreciate quality and not just quantity are crucial steps that need to be taken to ensure sustainable stability.” Development, he says, should not be top-down. “Very often, indigenous communities have their own solutions. These need to be brought into practice, or at least they need to be empowered.” In today's China, he says, quality of life has been sacrificed for high growth rates: “We went from no materialism to being overly materialistic without any idealism.”

It is this transformation, and an accompanying sense of anxiety and loss of values, that has brought young Chinese like Jiang to Tiantong, looking for direction. Zhang Jia, a young scholar at Beijing's Renmin University, is studying this recent proliferation of Buddhist “summer camps.” In central Hebei province, she found hundreds of young Chinese descending on the Bolin temple last summer, lost, like Jiang. “The Chinese people are seeking for their identity,” she said. “Buddhism, as part of our culture, is becoming an integral part of modern young Chinese beliefs.”

At Tiantong, Jiang said he found “hundreds of other people with similar questions.” “In the sutras, I found deep thoughts that spoke of the questions I had in my mind,” he explained. “In China, the only logic we're driven by now is the logic that ‘You should get more money'. We are taught that the answer to life's problems is to make more money. But the thing is: it's not solving the problems. It's only creating new ones.”