Shanghai, China -- The controversial abbot of Shaolin Temple says he will continue to concentrate on the overseas market even after the world famous temple has opened more than 40 centers around the world to teach foreigners kung fu and Zen Buddhism. 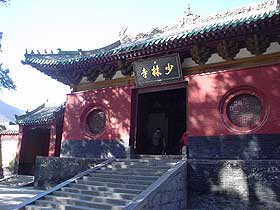 "Only if the temple grows stronger abroad will it have a bigger influence at home," Shi Yongxin, the temple's 30th abbot, told a cultural industry forum at Peking University over the weekend.

Shi said the ancient temple in central China's Henan Province came up with a convenient foreign development method - firstly renting houses to teach kung fu and then using the tuition fees to buy the premises.

"We almost do not need money, but only need to send out young monks (as trainers), rent a local house, decorate it and then start enrollment," he said.

The abbot said the temple did not aim to make money but to promote the Shaolin culture around the world.

Since taking up his post in 1999, the abbot's commercial activities - opening pharmacies, kung fu schools and online stores - have come under fire, with critics saying a temple should not engage in so many money-generating and publicity-gaining activities.

But Shi said he is determined to continue with commercial development to revitalize the 1,500-year-old temple and conserve its rich Buddhist and cultural heritage.

The temple had set up "culture centers" in cities such as London and Berlin where monks could teach in foreign languages, the abbot told the forum.

He said each center could enrol more than 1,000 students every year, mostly adults curious about kung fu and Zen.

Shi goes to some centers once every two years to test foreign students on kung fu.

The centers also taught the Chinese language and lifestyles of monks to introduce Shaolin culture to foreigners.

"I hope other temples in China can also send monks to world cities, because it has become an ideal way to promote Buddhism across the world," Shi said.

The temple also sends monks to perform kung fu shows around the world.

Shi said more than 400 martial monks performed abroad last year. They performed in 56 cities in 29 countries in the past three years and won many prizes.