Will Mongolia go the way of South Korea? 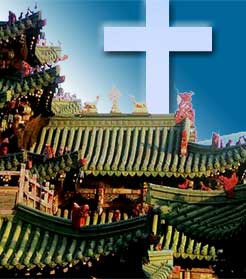 The collapse of communism in 1990 brought religious freedom as well as democracy, and proselytizers from around the world have flocked to this sparsely populated country wedged between Russia and China.

"Here, history is ancient but Christianity is very young," said the Rev. Tiago Copolla, a Catholic priest from Brazil.

The new openness has also sparked a revival of Mongolia's traditional religions: Buddhism and a native shamanism. Pictures of the Buddha adorn many homes, and piles of "shaman" rocks can be seen along country roads -- shrines to spirits in nature.

'We have been Buddhist all along'

Even Orthodox Russian priests are back, not to proselytize but to serve the dwindling ranks of Russians who moved here when Mongolia was a Soviet satellite.

Among those seeking converts, the Mormons are perhaps most visible as they travel from house to house in their distinctive white shirts and black pants.

"I grew up in the church, and I hope other people might learn and be helped," said Michael Corrigan, a young Mormon from Chicago who has been moved by Mongolia's poor -- more than a third of its 2.5 million people live in extreme poverty.

Christian convert Nyamsuren, a 21-year-old recent college graduate, first set foot in a church on Christmas Eve in 2002, when a friend persuaded him to come along. Like many Mongolians, he uses one name.

"At first I didn't believe. I just liked the atmosphere. There was a sense of communion, of belonging," Nyamsuren said. "Later, I liked the teachings as well."

Poor and an orphan, he always needed money. "So I started making money in bad ways,'' he said without elaborating. His church helped him turn his life around. "I learned that what I was doing was a sin."

Outside the big cities, nomads live as they have for centuries.

"We have been Buddhist all along," said Megmar, a sheep herder. "The younger people are interested in Christianity because they like to be together and one friend brings another friend. I think Buddhism is enough for me."